I am not really a Corvette guy as previously stated, but I need to cap off two stories once and for all.
Let us begin at the National Corvette Museum and review a little, back in early 2014 a giant sinkhole opened and swallowed 8 Corvettes! 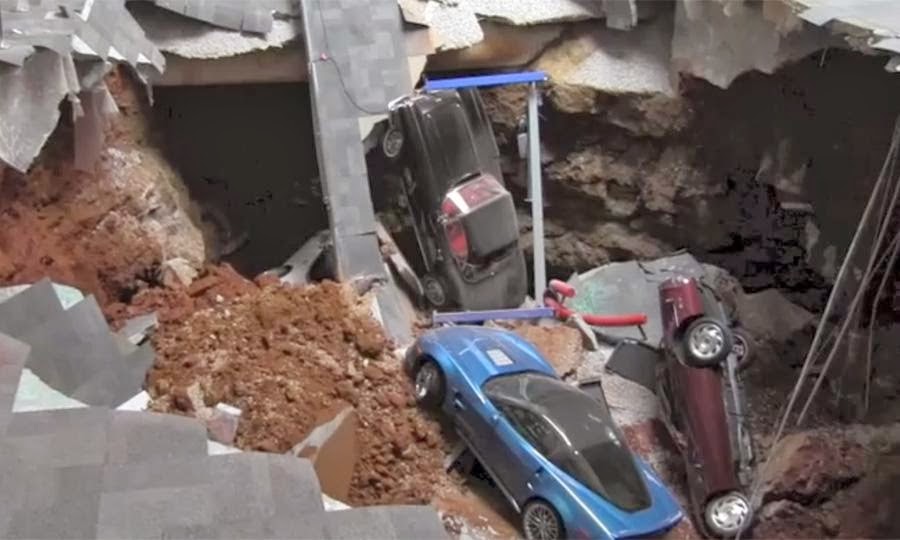 I did get a kick out of the ridiculous internet claims this was a hoax and these were Hot Wheels cars! 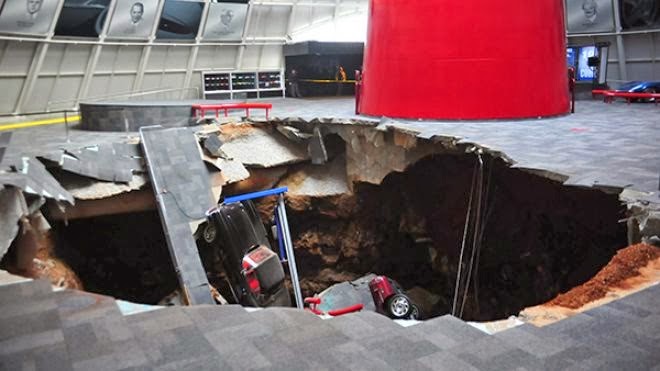 To see my original blog which included security camera footage as it happened see 2/15/2014
Corvettes Journey to the Center of the Earth so you get up to speed! 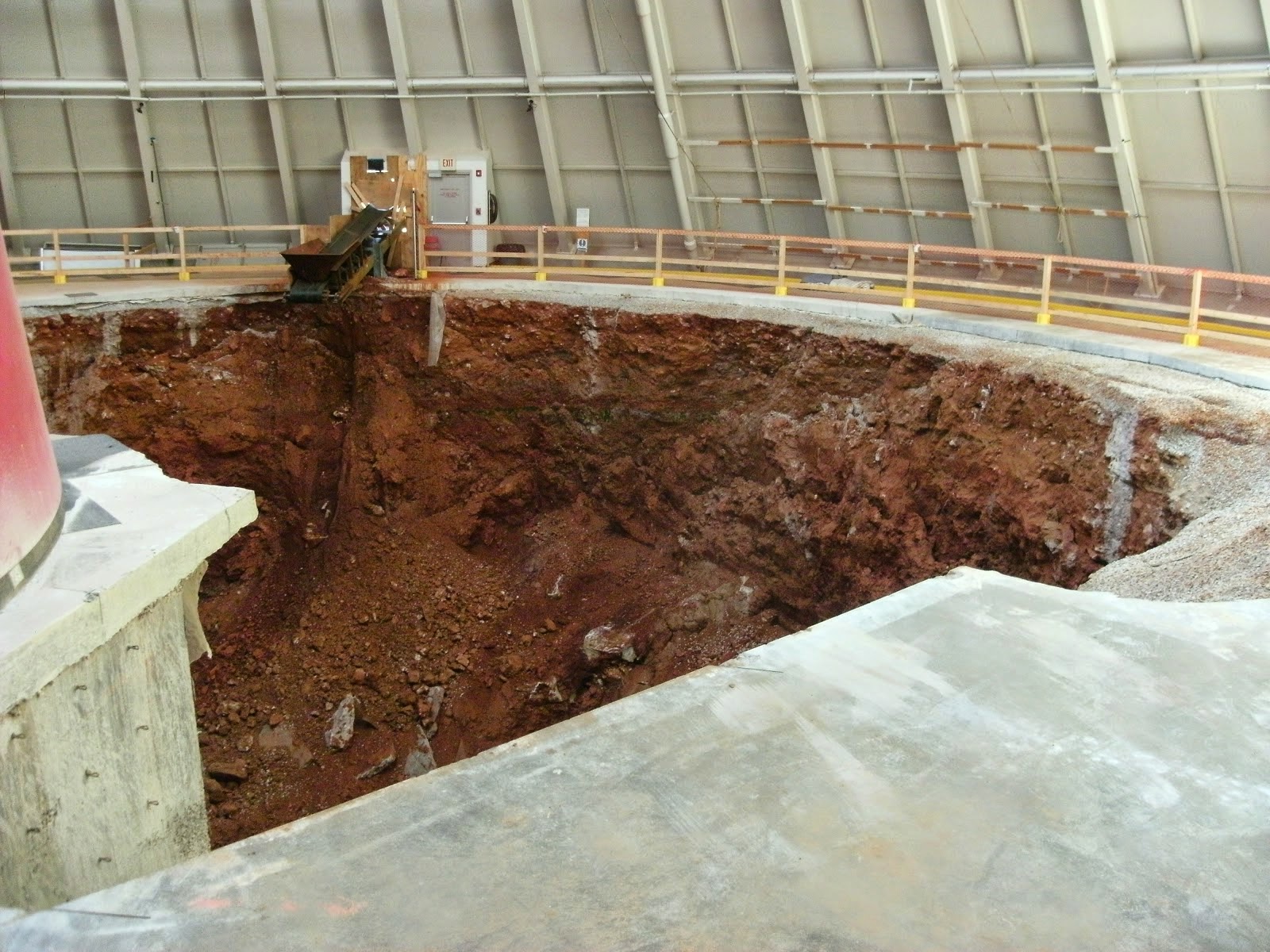 Next travel back to the blog of 10/1/2014 as the CARHUNTER gets the HOLE story and visited the Sinkhole in person! 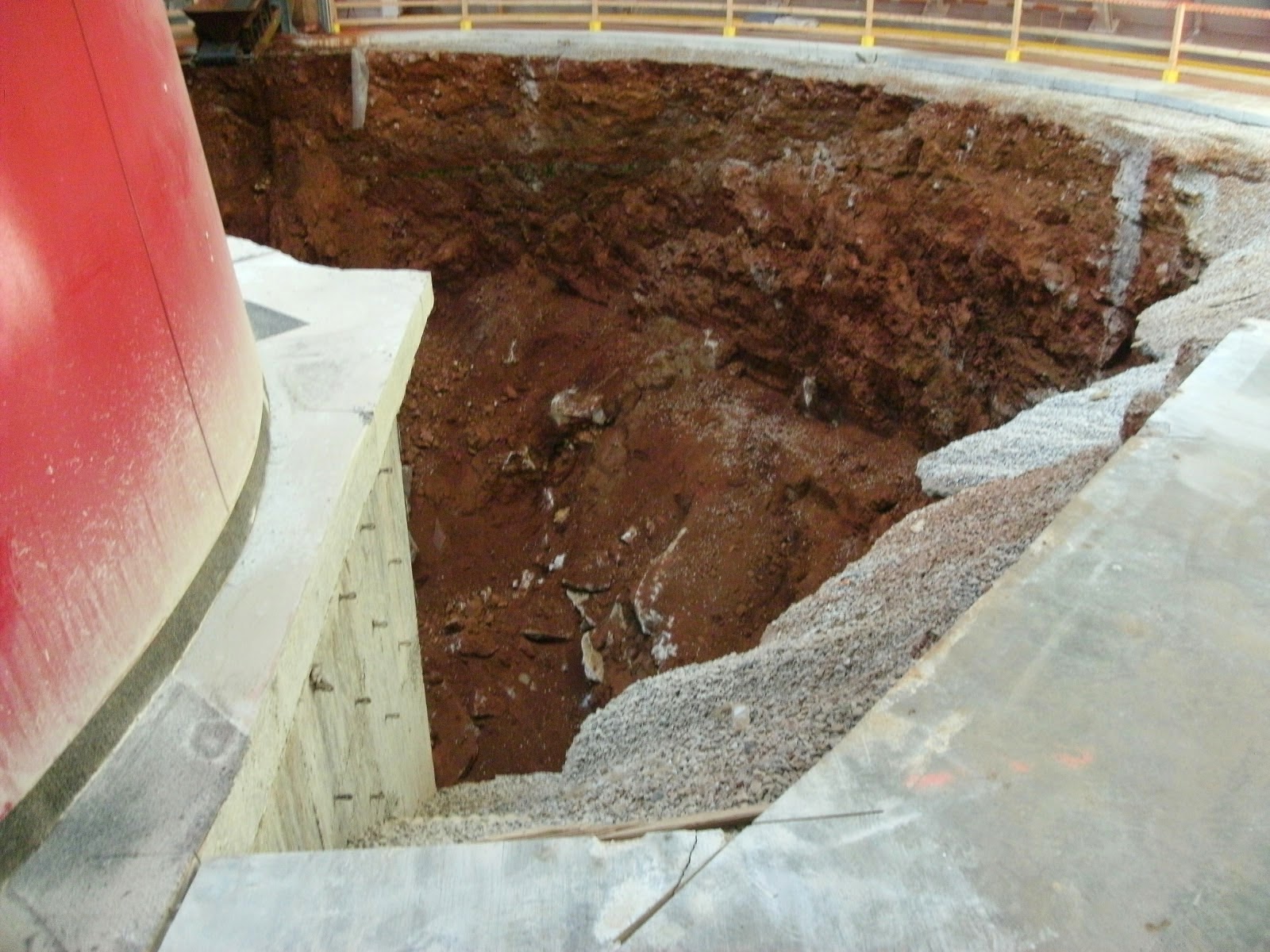 Obviously the event really happened, these are not Hot Wheels cars! 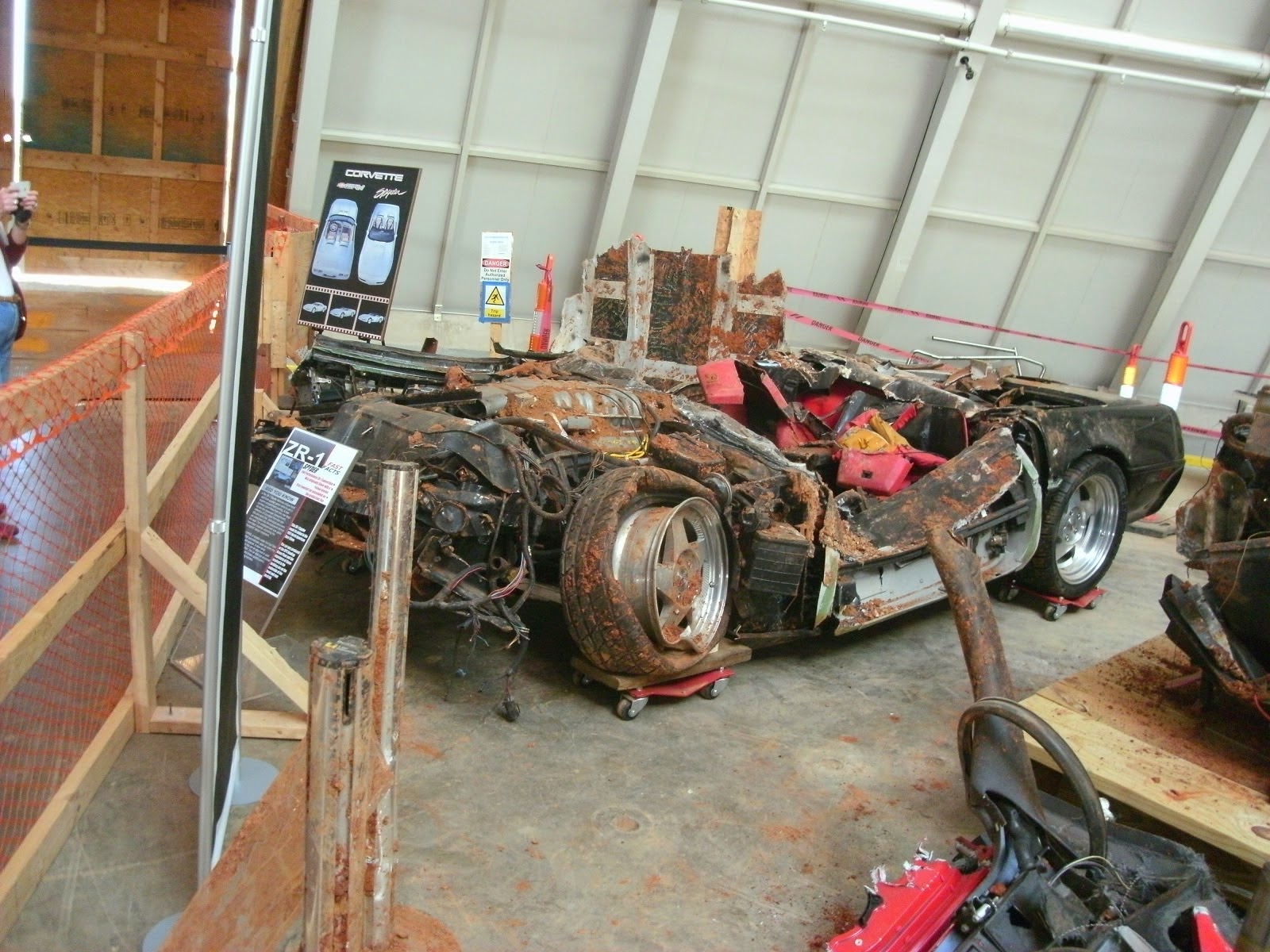 The sinkhole aftermath had become the biggest draw as attendance at the museum soared and at last word it was going to be a permanent exhibit. 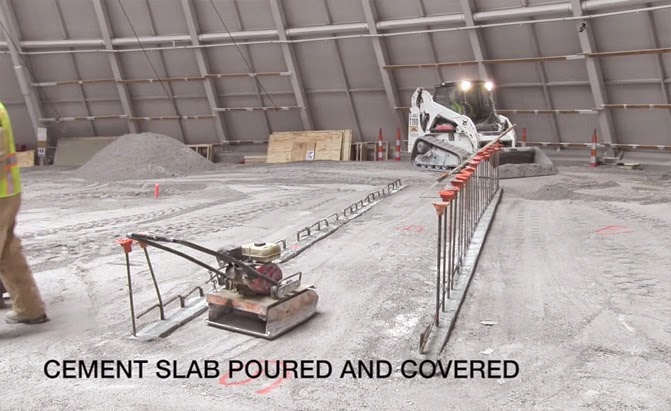 Last Fall the executive board of the Museum decided to fill in the Sinkhole! 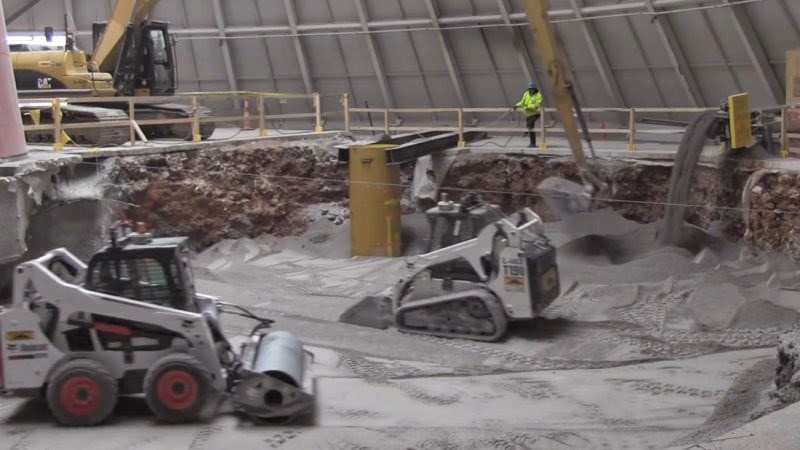 I have a question, they have no concern about all the ground around the sinkhole and left it as it was? 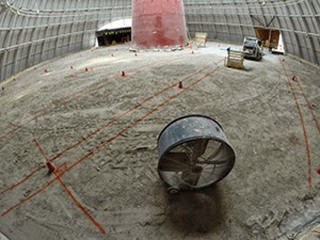 It could have been worse I guess? 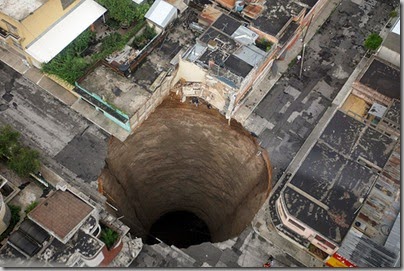 An exhibit will be in place about the sinkhole with the destroyed cars to see.
They are auctioning off a rather low brow "print" (I am not an art critic) that looks like a comic book colored in with crayons! 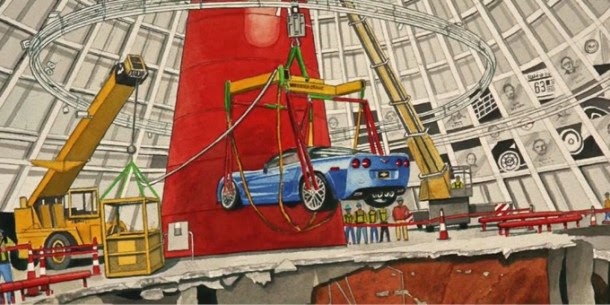 Inspired by the extraction of one of the Vettes. 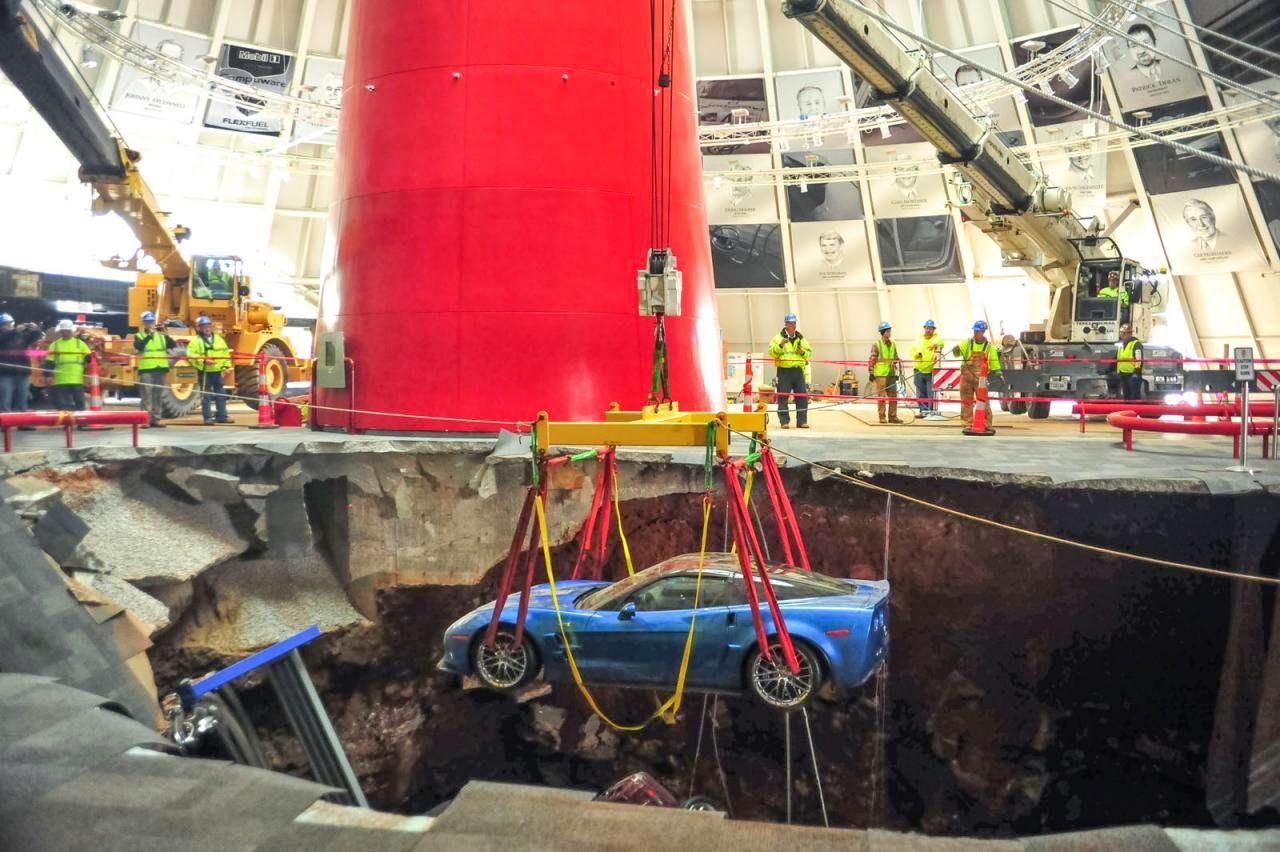 If I find my way in the area I will probably pop in and see the end result one day.
NEXT
OH MY LOOK AT ALL THOSE CORVETTES blog of 12/16/13 Quick recap- VH1 late 80's gives away 36 Corvettes, one of every year to date to one person, the Artist Peter Max bought the entire kit and kaboodle with a concept to do an exhibit with hand paint graphics. The cars sat for decades as they started to go downhill and were moved several times! 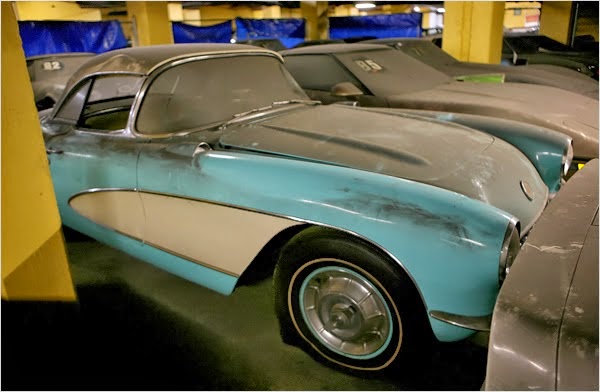 The 62 above was recently brought back to life and used by Jerry Seinfeld in an episode of Comedians in Cars getting Coffee,but how? 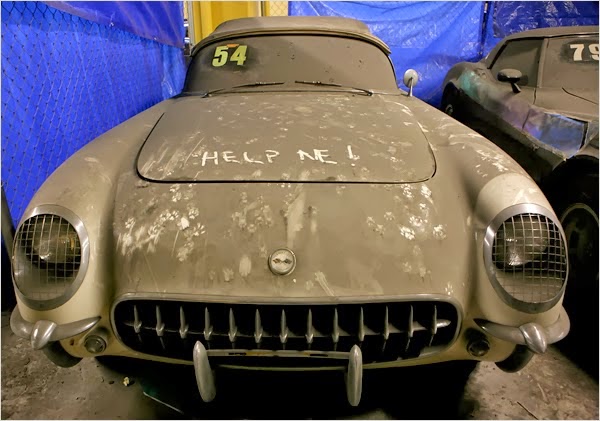 As the 54 above says "HELP ME!" and someone did help, the photo below was snuck by CARHUNTER after it received a cleaning that worked. 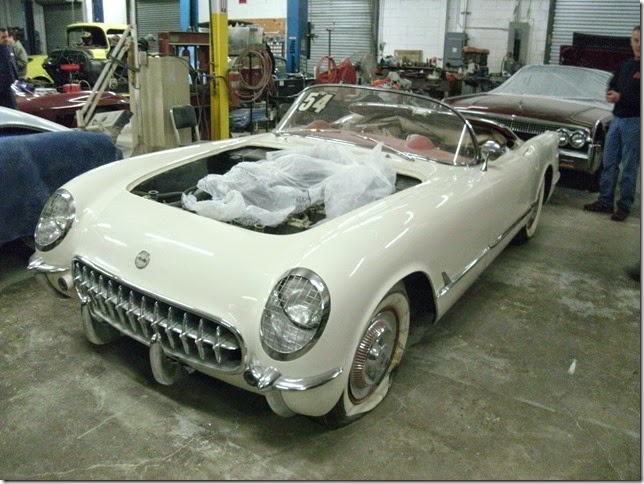 What happened? One of the owners of parking facilities that housed the cars was also a Corvette guy so he was able to talk Peter Max into selling them all. Corvette experts were enlisted to evaluate and value each car. Lets be clear here these cars were snatched up back in the day just to fill an inventory, many daily drivers and most mundane although some were more rare just by nature, but the only important part was the year of each car. 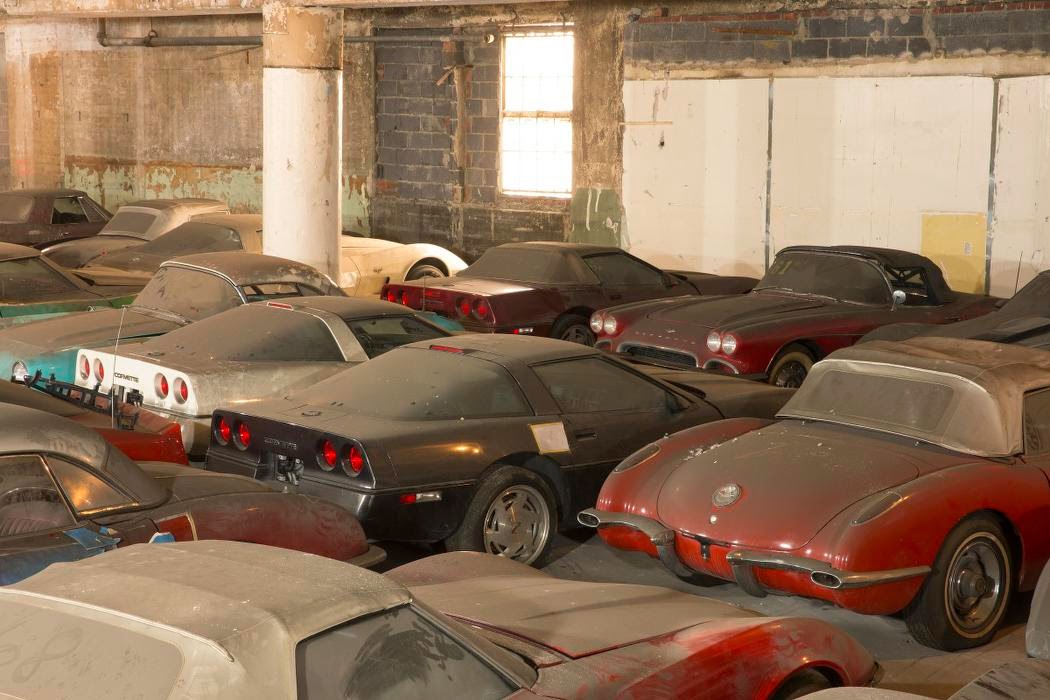 1989 36 Corvettes purchased by VH1 with a reported $610,000 spent. Peter Max bought the collection from the winner of the contest in Long Island for $250,000 cash, $250,000 worth of Peter Max artwork and a promise of a portion of any proceeds if he sold the cars ever!
You can see in these recent photos the cars were being evaluated by the partial cleaning of decades of dirt being removed recently!

I am not going to go into every detail, but make a long ongoing story shorter,CARHUNTER was able to see a small grouping of the cars in a body shop undergoing "restorations" although not allowed to photograph them, later in that day got permission, but the body shop owner would not return my phone call. I was in conversations with one of the group that was financing the venture and was to see the rest of the cars agreeing to hold off on the blog until they approved and completed their publicity announcements, but many emails were ignored from that day on. 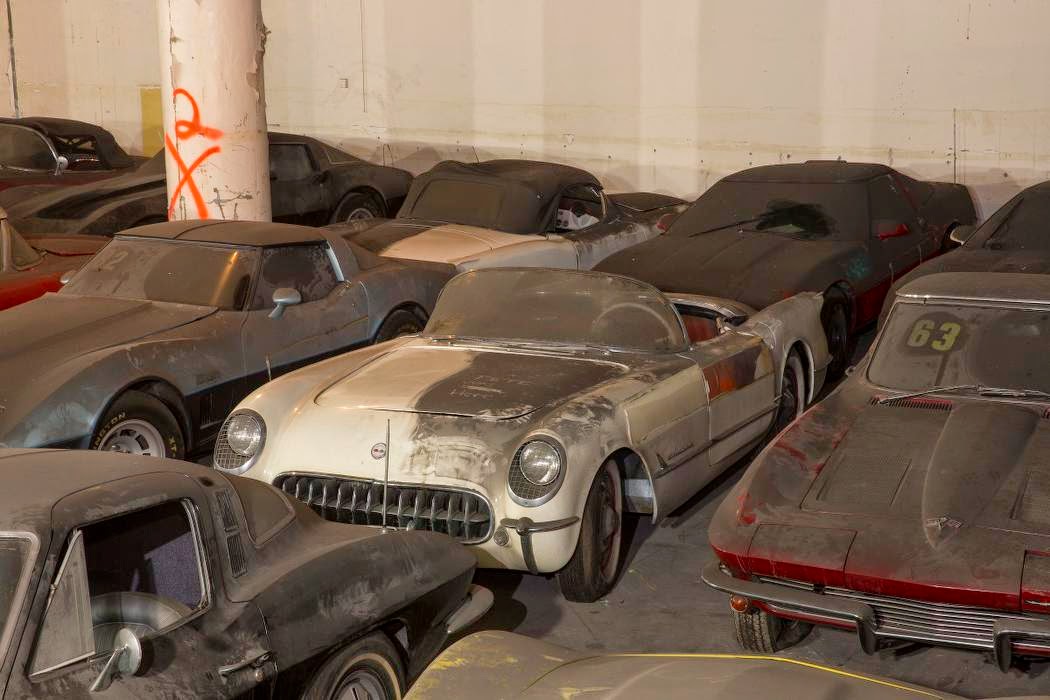 It is reported the collection did not come cheap and lets not follow the illusion that this is a great humanitarian rescue, clearly a large profit is the goal here!
CARHUNTER has been snubbed and while thoughts of $$$$ profit abound, CARHUNTER does this all at my own expense so I am not chasing or begging anymore.
This entire fiasco from day one is a horrible waste of cars and effort, some like the 54 were cleaned up, the 53 needed a full restoration, one of the few with big value. The 62 had a cracked block and was quickly patched up for the Jerry Seinfeld spot. 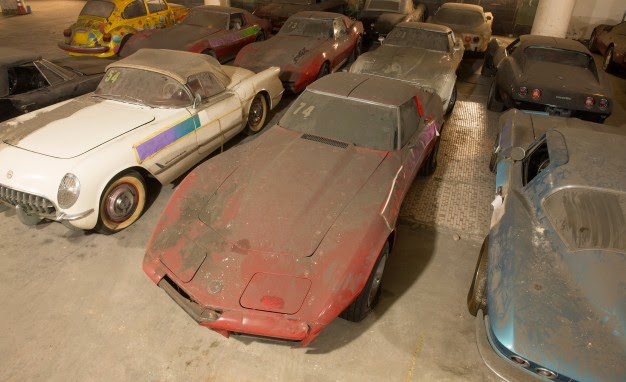 The race to the prize continues below! Yes race as the contract had deadlines, a certain total of cars each month, it feels like those stupid reality car shows on Velocity! Restore a complete car in days, yes that should be perfect right? 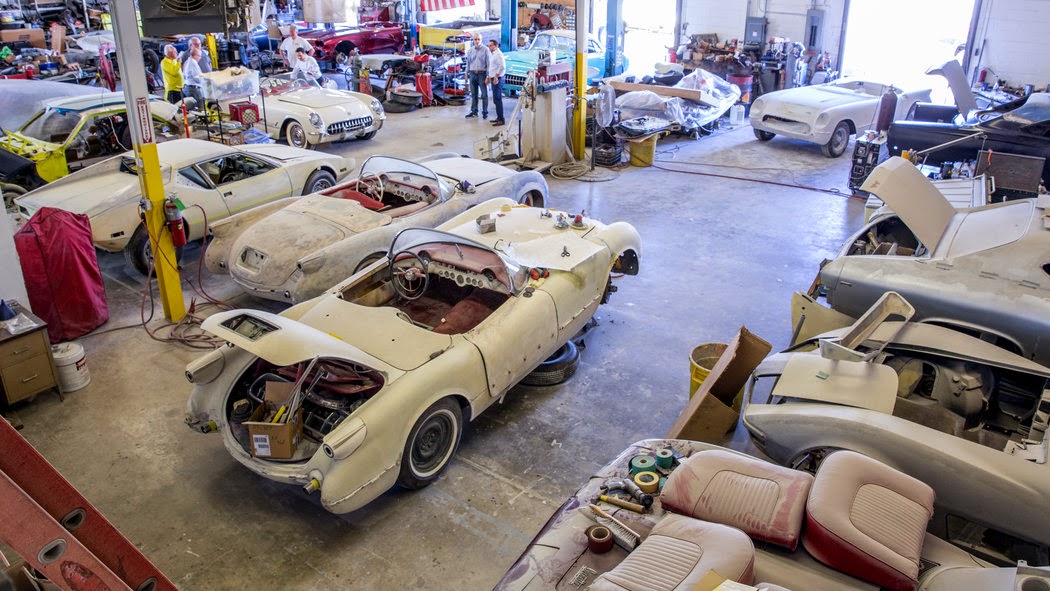 Many of the mundane cars would probably exceed their value if a full restoration is needed!

A story has broken that 2 gentleman claim Mr Max hired them to sell the cars originally so they have filed a lawsuit for 1$ million against him and if the story is true the original winner of the cars also has some proceeds headed his way, he knows the cars were sold because he has been interviewed. 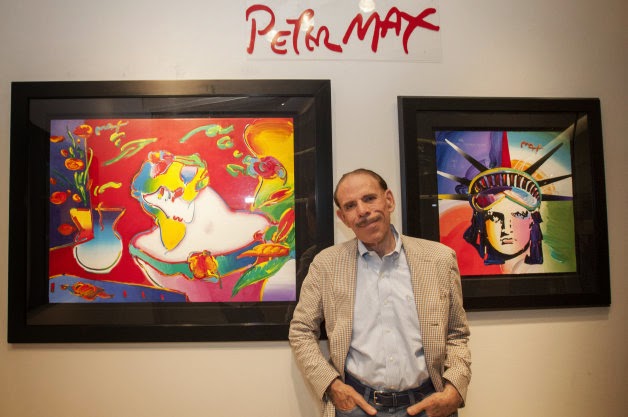 Can you imagine how much money was spent in storage over the last 25 years? At one point Max was hit with tax evasion, related?
Since the people involved have turned their backs on CARHUNTER I will not have much more to add other than this is just a mess.
Like I stated, I am not a Corvette guy and it was strange to be in a shop full of Vette Dudes, I might have been the only one that noticed a Cuda in the shop and a few other MOPARS! 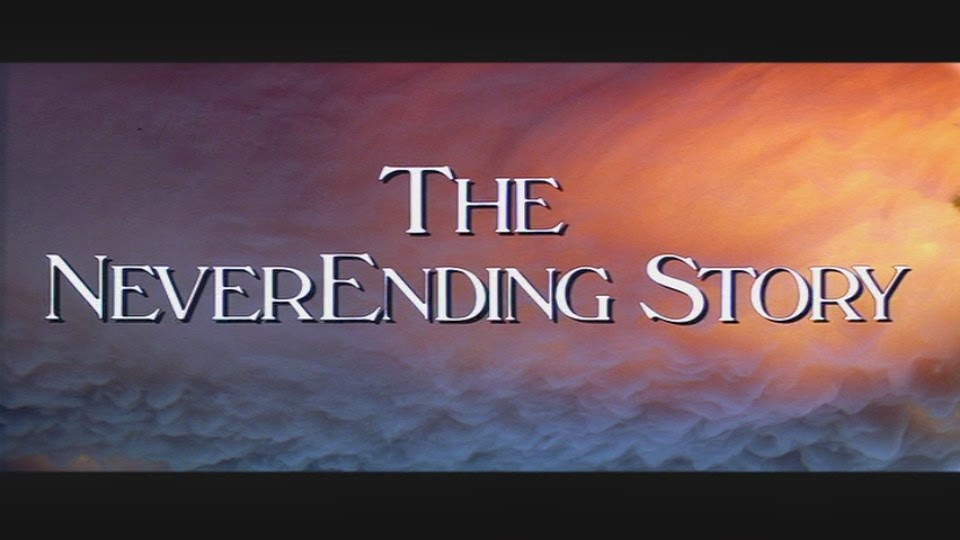 Like the movie, but CARHUNTER is getting out of the story!
I predict a big auction live on Velocity, Corvettes to the Max!