REMEMBER THIS IS PART 3 SEE PARTS 1 AND 2
Reality shows, poo poo, Reality Blog wins!
No legit group ever came up with a high mileage vehicle based on fact?
Enter one of the best known forces in stock car racing, if you are any kind of valid racing fan the names Holman-Moody should be known.

Pre-NASCAR h/m was rocking and rolling and into the mid 50's, NASCAR's first decade still coming up, turning out some of the fastest cars out there always on the cutting edge of technology. 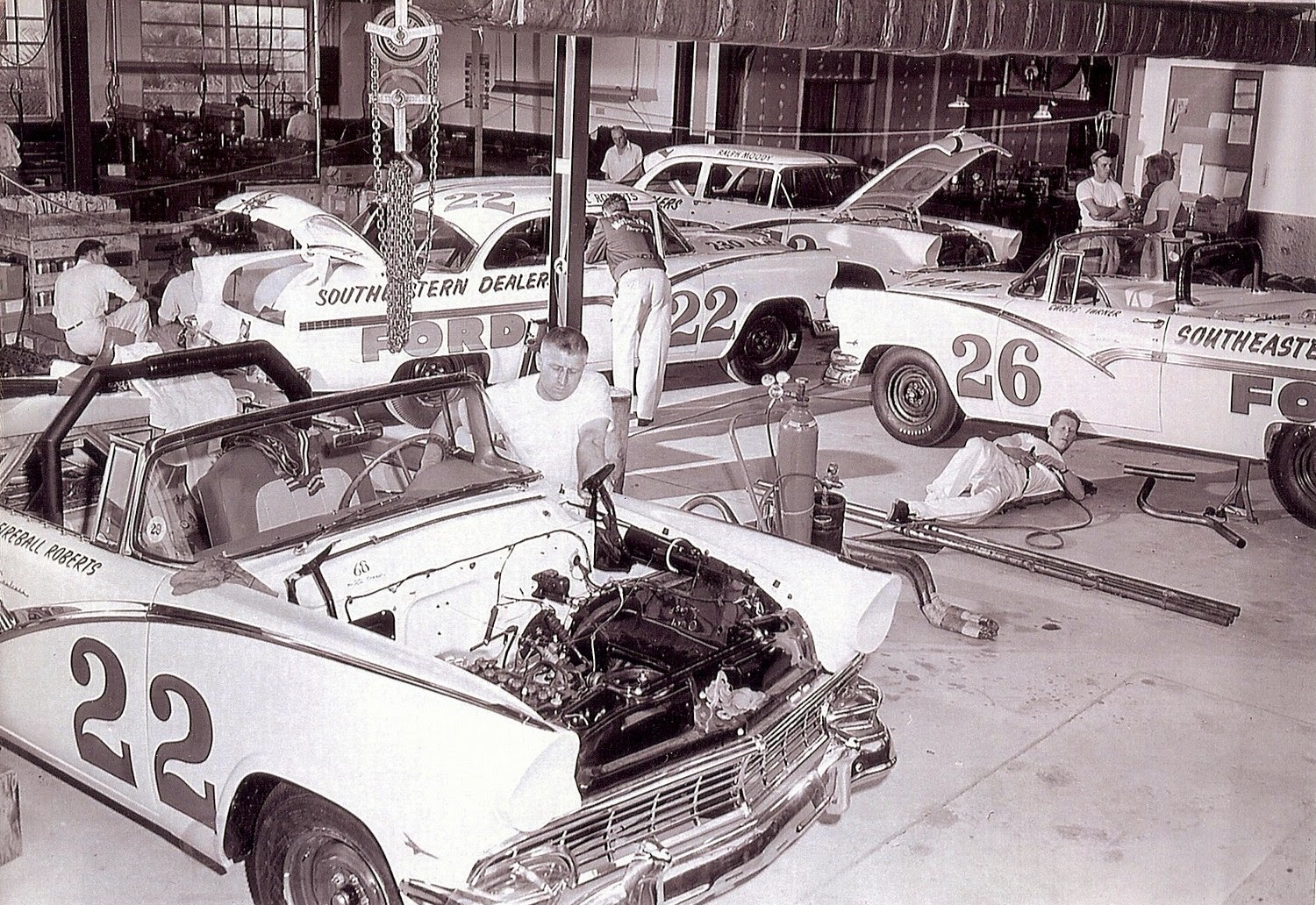 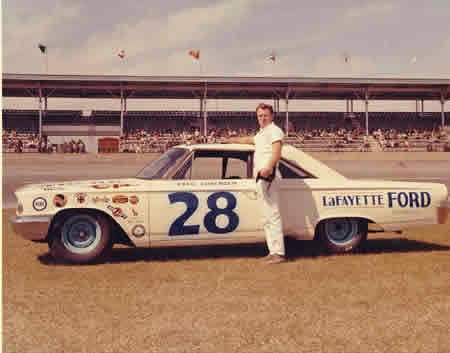 OK back on track (pun intended) 1974 that little gas crisis shows up, Ralph Moody now retired started to tinker and built a high mileage car, but foggy on that one. Skip to the late 70's Moody with his partner Mike Shetley may have built 10 prototypes with various driveline combos, not verified. In 2007 one of these 79-80 Mercury Capri's showed up on eBay and I read all the "know it all's" ripping the car apart as a scam. 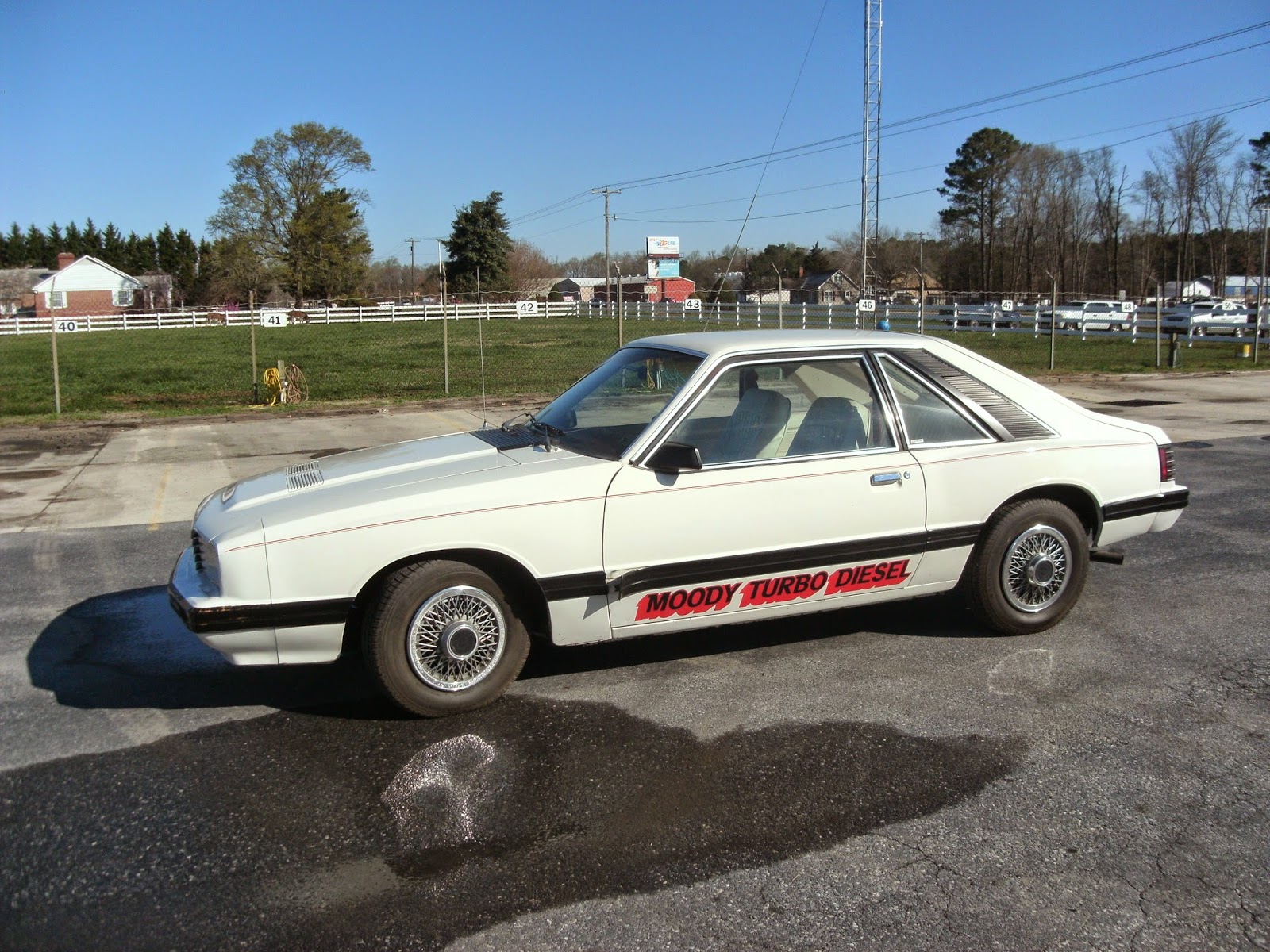 A phone call from a good friend informed the CARHUNTER earlier this year about a pretty interesting car he knew about, yes it was a Moody Turbo Diesel! 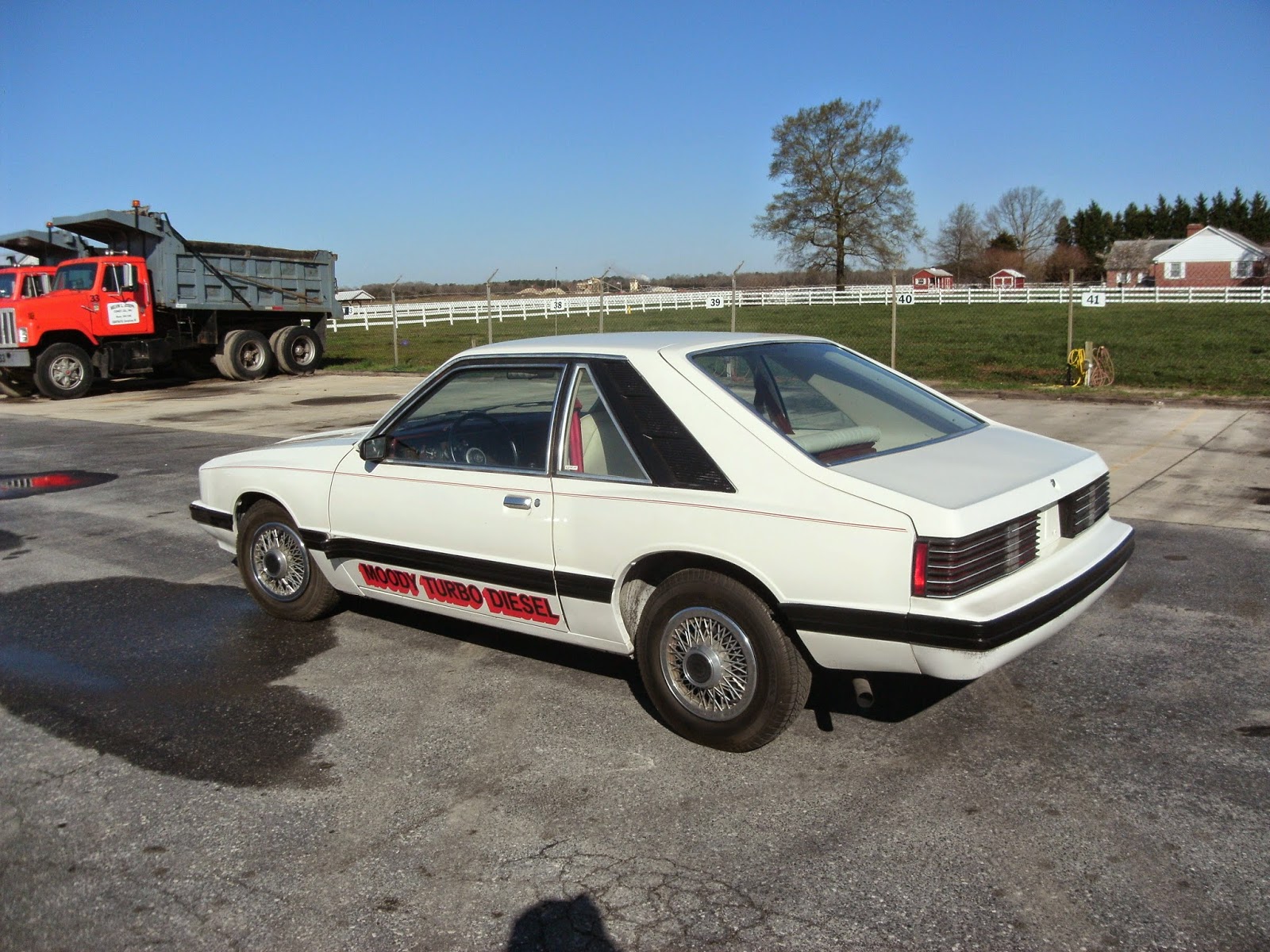 We arranged a visit to see the car and CARHUNTER got a chance to drive it on an old runway so I can testify it exists, even with a turbo it was really slow and took a long time for turbo boost to help out, but the car was tested and got 80+ MPG! 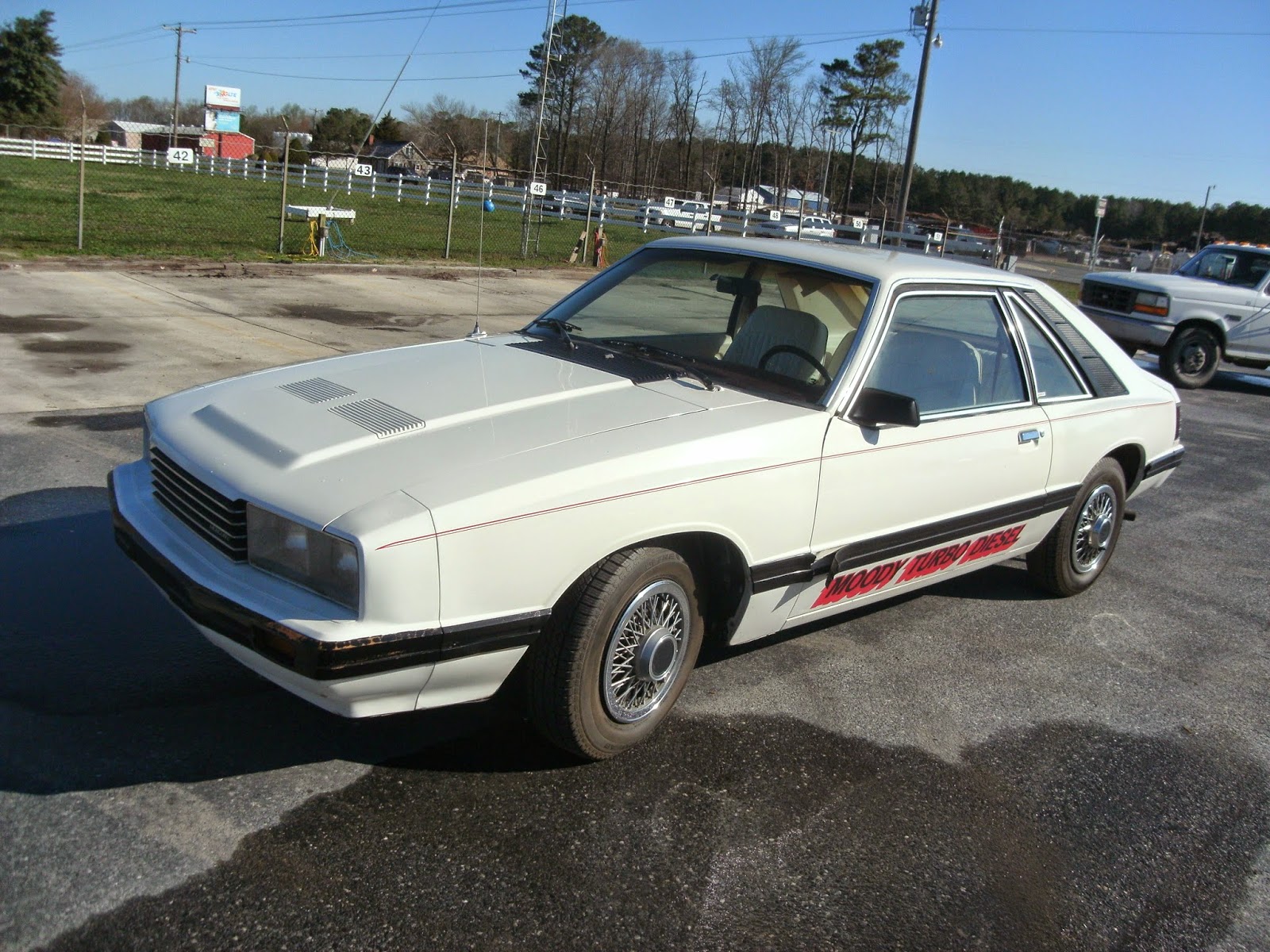 Odd year when the Mercury Capri shared the Mustang body and you can see there is nothing mysterious about this car down to its spoke wheel covers, it appears stock. Could have more tweaking along with lighter components netted higher MPG, probably. Fiberglass replacement parts, light alloy wheels and a more aerodynamic snout as we see later on could work, but not needed. The point was the car made 80 MPG from a plain car using a Perkins diesel with a turbo, the drive reminded me of a test drive in an 80's Jeep Cherokee Turbo Diesel. I was a parts manager at a Jeep dealer and grabbed the first one off the truck diesel and it was the slowest thing I ever drove, but when that turbo boost built up it did get moving, a little! 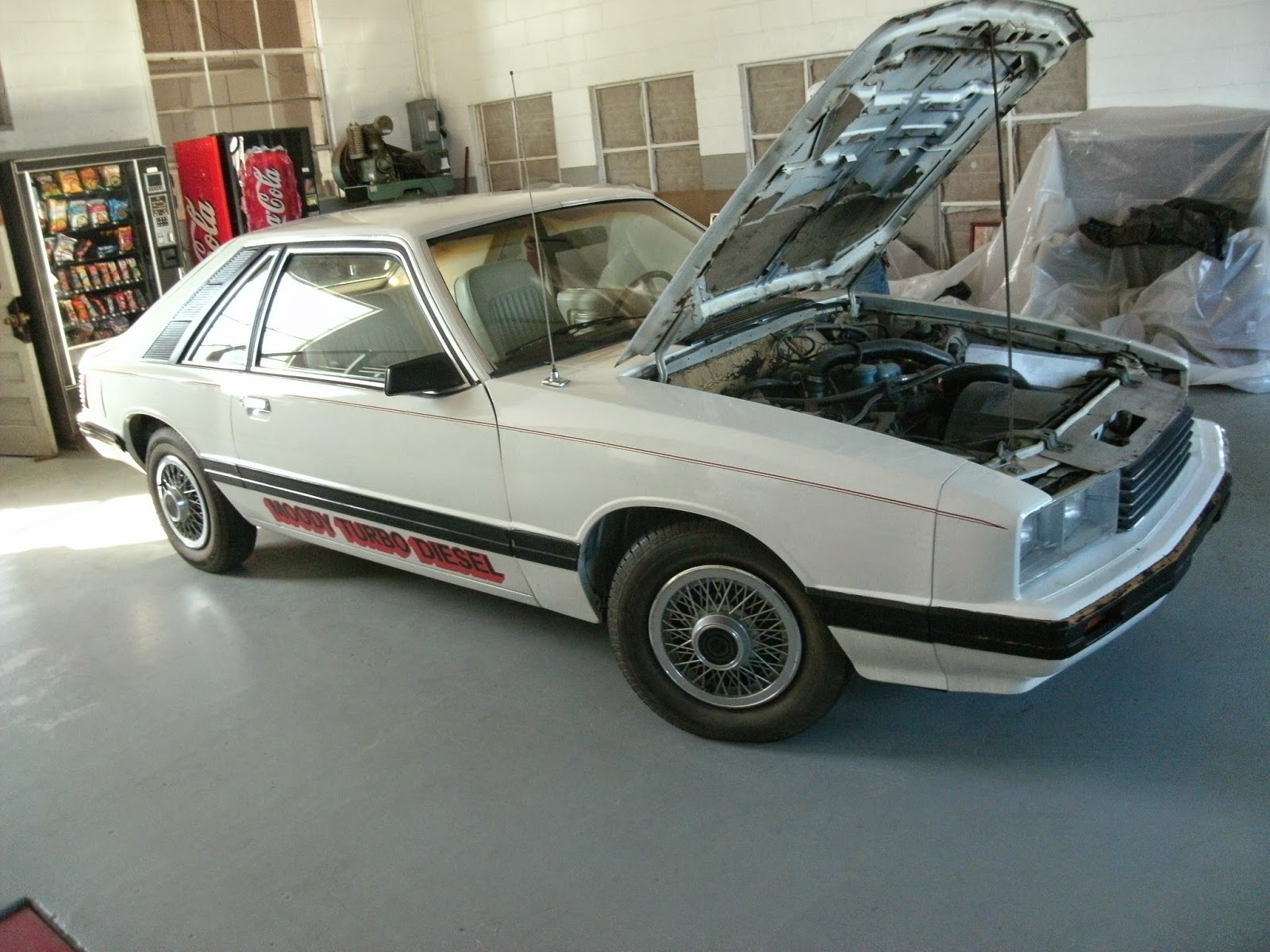 You can find rumors and conspiracy theories about this one also. Threats and offers of millions to buy the plans? Let me clearly state that there is nothing mysterious about the car nor anything that needed guarded copyrights and patents. Very simple for anyone to reproduce this one with a small efficient engine and geared correctly, I recall an instructor I had in trade school built a Gremlin with a 4 Cylinder AIR cooled Perkins diesel engine that got some crazy high MPG in the early 80's. Wonder what happened to that car? 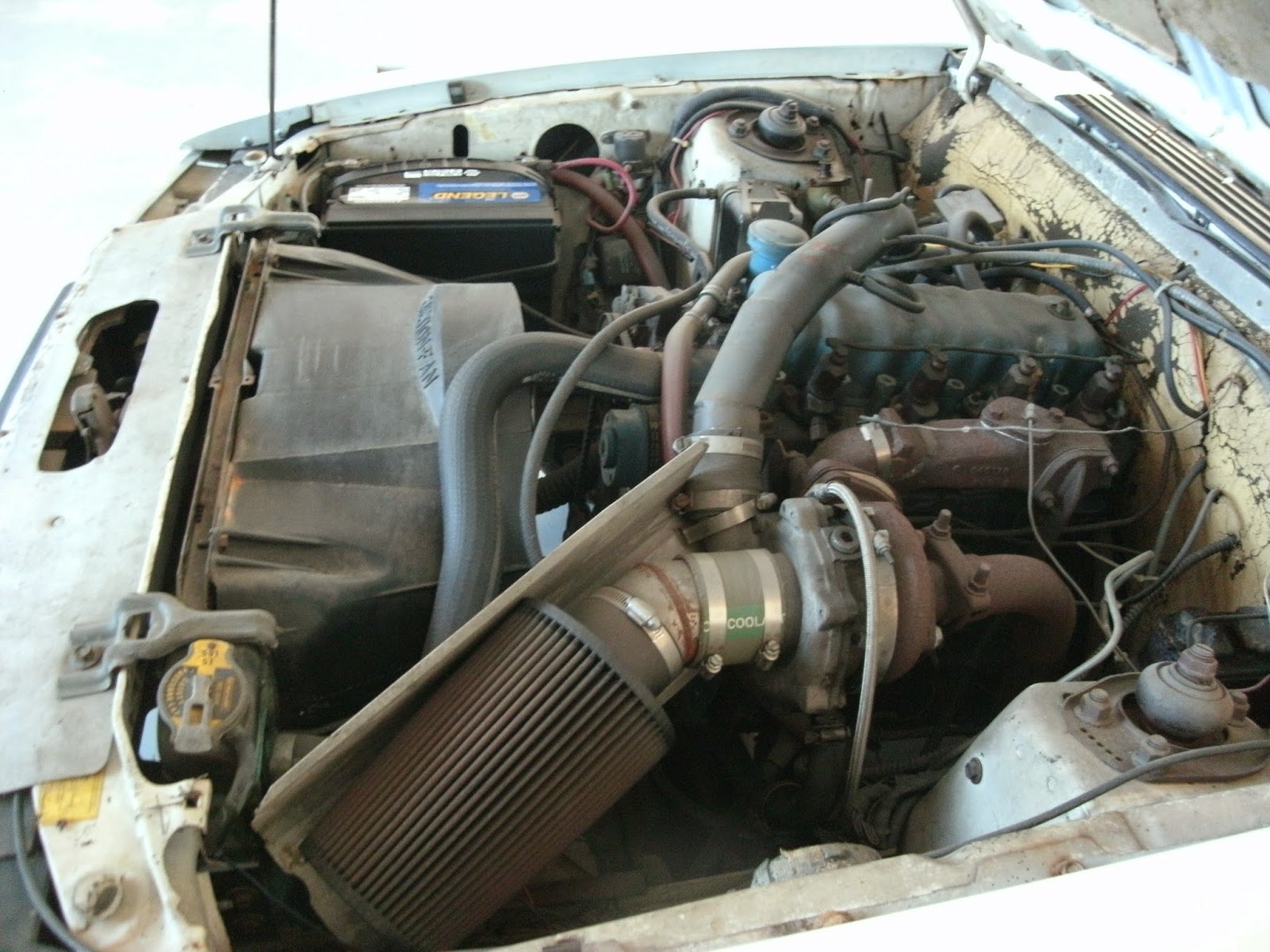 The team tried to get the car tested  and EPA certified and the feds had no interest in testing it so Moody had a former EPA head he knew perform his own control tests and declared it to be one of the cleanest running vehicles he ever tested!
I have to update this a bit now that I carefully read an article over again;
Quoted from the article which mentioned a few people who dove into Turbo Diesel swaps head first, EPA certification " a production run of 2000 vehicles requires a 50,000 mile test costing $40,000, not the EPA refused to test the vehicle! Think about how much time the EPA would waste testing every car somebody tossed together? The Moody-Shetley project never proved 84 MPG, Moody and Shetley dissolved the partnership amidst lawsuits and bad blood. Several other projects would claim 45-55 MPG from Turbo Diesel builds, but in 1980 A VW Rabbit Diesel had a city EPA rating of 42 MPG so ask yourself what was the point of all these dreamers? Lets face it everybody involved in this project lives off the aura filled mystery of conspiracies when in reality there was no patented invention to sell and many manufacturers were on the cusp of production diesel cars anyway. Shetley was reported to have been charged with fraud over false EPA statements. 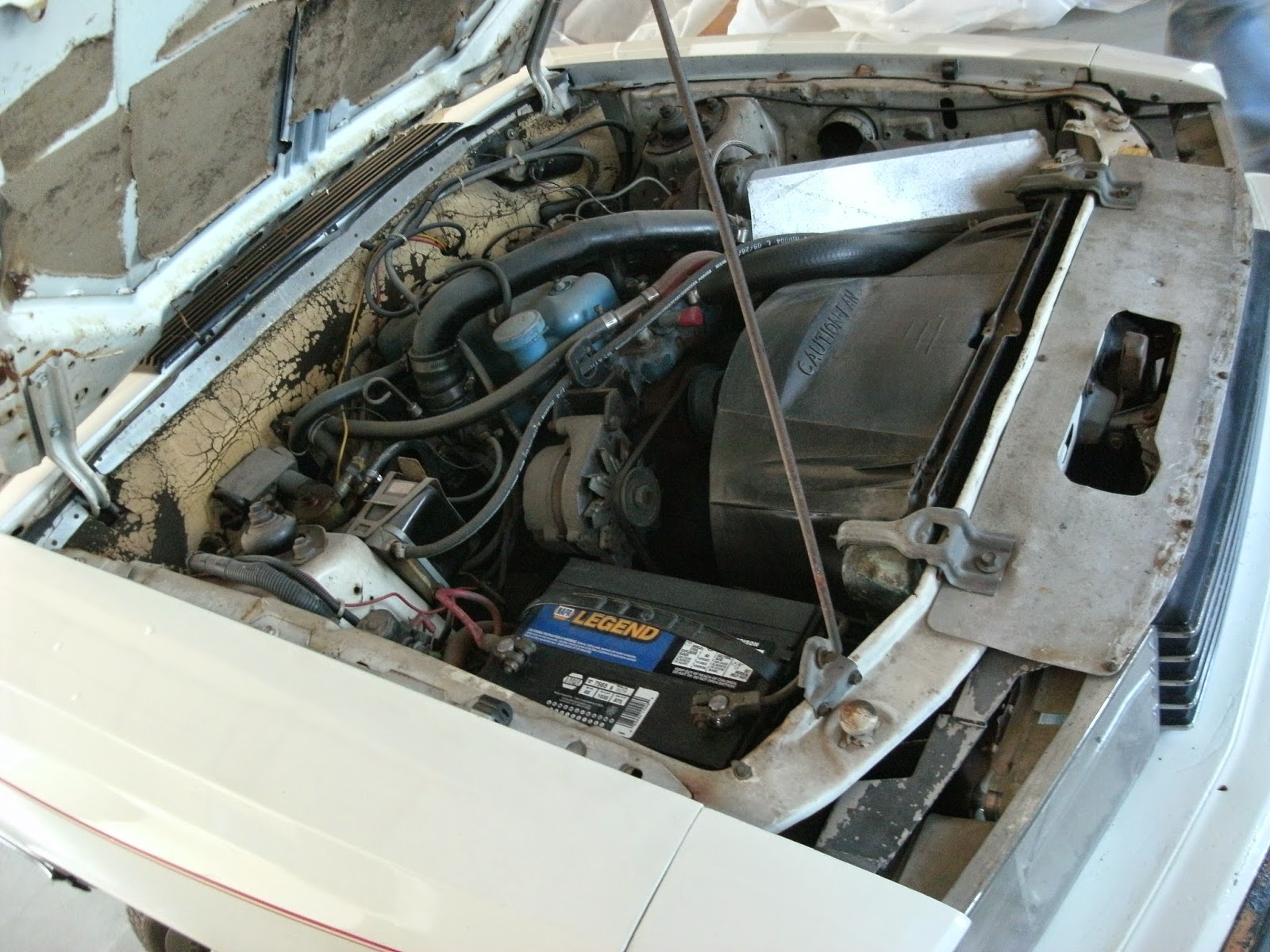 Why did the project die, there was nothing to sell except a chance for someone to market a similar car and get a percentage for the guidance. The auto makers could have built the car if they wanted as well! 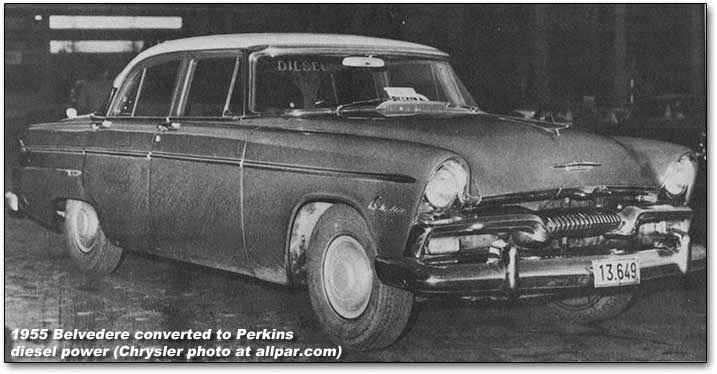 From about the mid 50's into the late 60's Plymouth and Jeep tried several Perkins Diesel powered cars, but you never heard of them right? 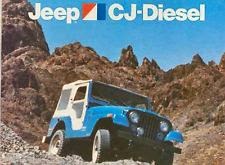 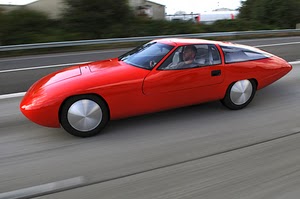 Meet the AVION 100 MPG!
A .27 drag coefficient and 1550 lbs,
0-60 5.3 seconds and 157 MPH
1984 Craig Henderson and Bill Green started a two year project and created the Avion
http://www.100mpgplus.com/technology/index.html
30 years have passed and still no interest in the car, but you might be able to buy it as a kit car, but lets go back a little bit first
I get chills when I watch the video because it is a good looking car that used the concept of aerodynamics and light weight, an aluminum chassis, fiberglass and plastic powered by a Shelby 4 cylinder turbo engine in one configuration.
Watch the video please!

Now six + years later and there is still no investors to help Craig follow the dream!

An Audi 4 cylinder Diesel also was used at one point, realistically the Avion might average 40-50 MPG in  real world usage, but maybe 75-80 mpg with a diesel in place. 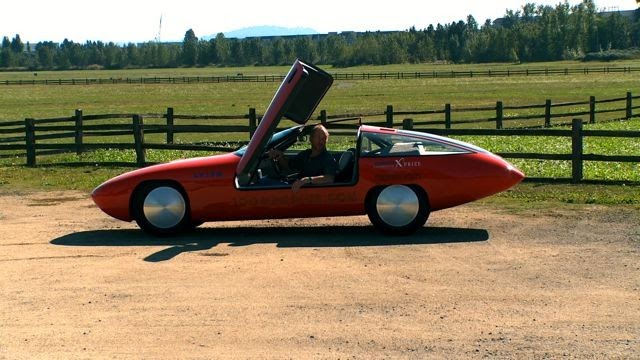 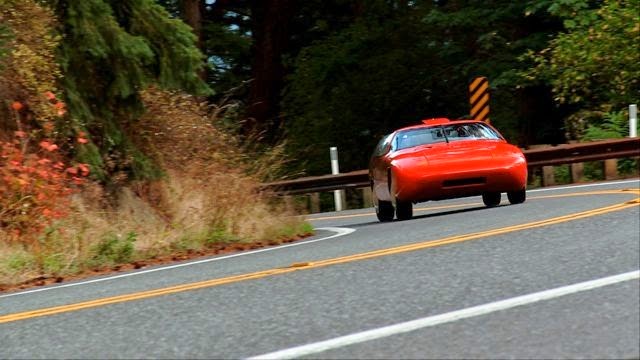 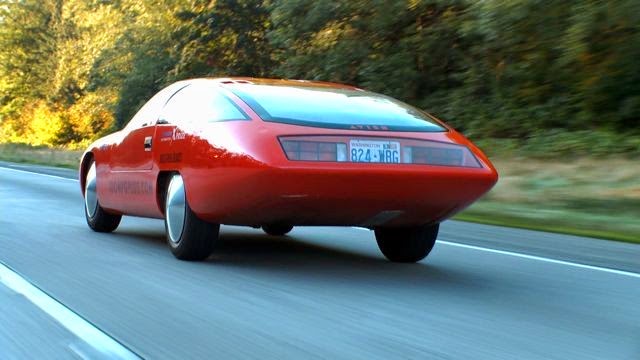 Nothing crazy here just a sleek lightweight car with an efficient powertrain! 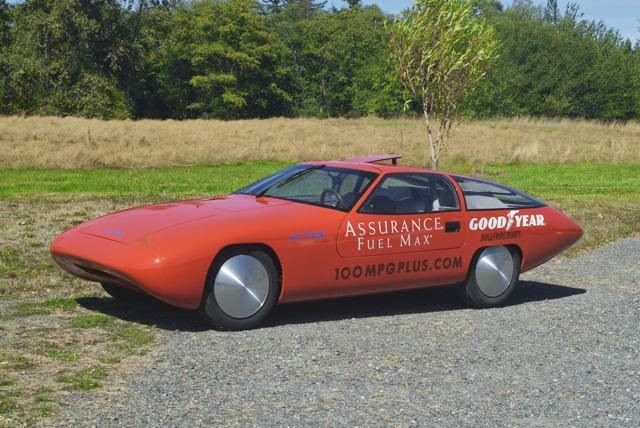 Lack of any interest and the car was parked until recently and again a big thud, Craig Henderson has told me he wanted to offer the Avion as a kit car with the builders choice of engines,but the reality is an initial investment of $1.5 million would be needed to get the kits into production. 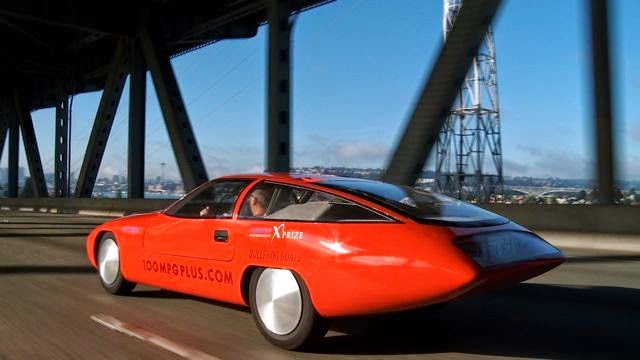 The Avion entered many a mileage competition including X-prize
http://auto.xprize.org/
The prize would be $10 million which could have funded the production of the kit cars.
The class rules are the car must seat 4, have at least 4  wheels and a range of 200 miles. Must get 100 mpg minimum and the Avion had actually set a Guinness world record.
It seems the rules changed the year the Avion entered the x-prize and they allowed motorcycles in the class and limited the range to 100 miles giving electric cars an advantage.
Peter Diamandis runs the x-prize and started up 15 companies, best described as a an entrepreneur who focuses on new technology while offering large sums of money for new ideas that will benefit the planet. 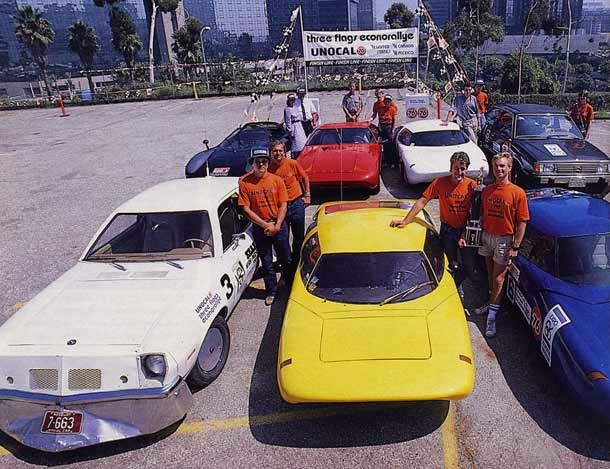 I certainly can feel Craig's disappointment that the Avion was never put in production, but again a case of a very thoughtfully designed car with no hidden secrets or invention to make the creators rich. The only prize here would have been offering technical advise to produce the Avion and a percentage of the sales!
THERE ARE NO CREDIBLE REASON WHY ONE OF THE AUTO MANUFACTURERS COULD NOT HAVE BUILT A CAR THIS EFFICIENT - TWO COLLEGE KIDS DID 25 YEARS AGO!
As I was finishing this up GM announced a new car called the Bolt on the heals of the failed  stillborn Volt 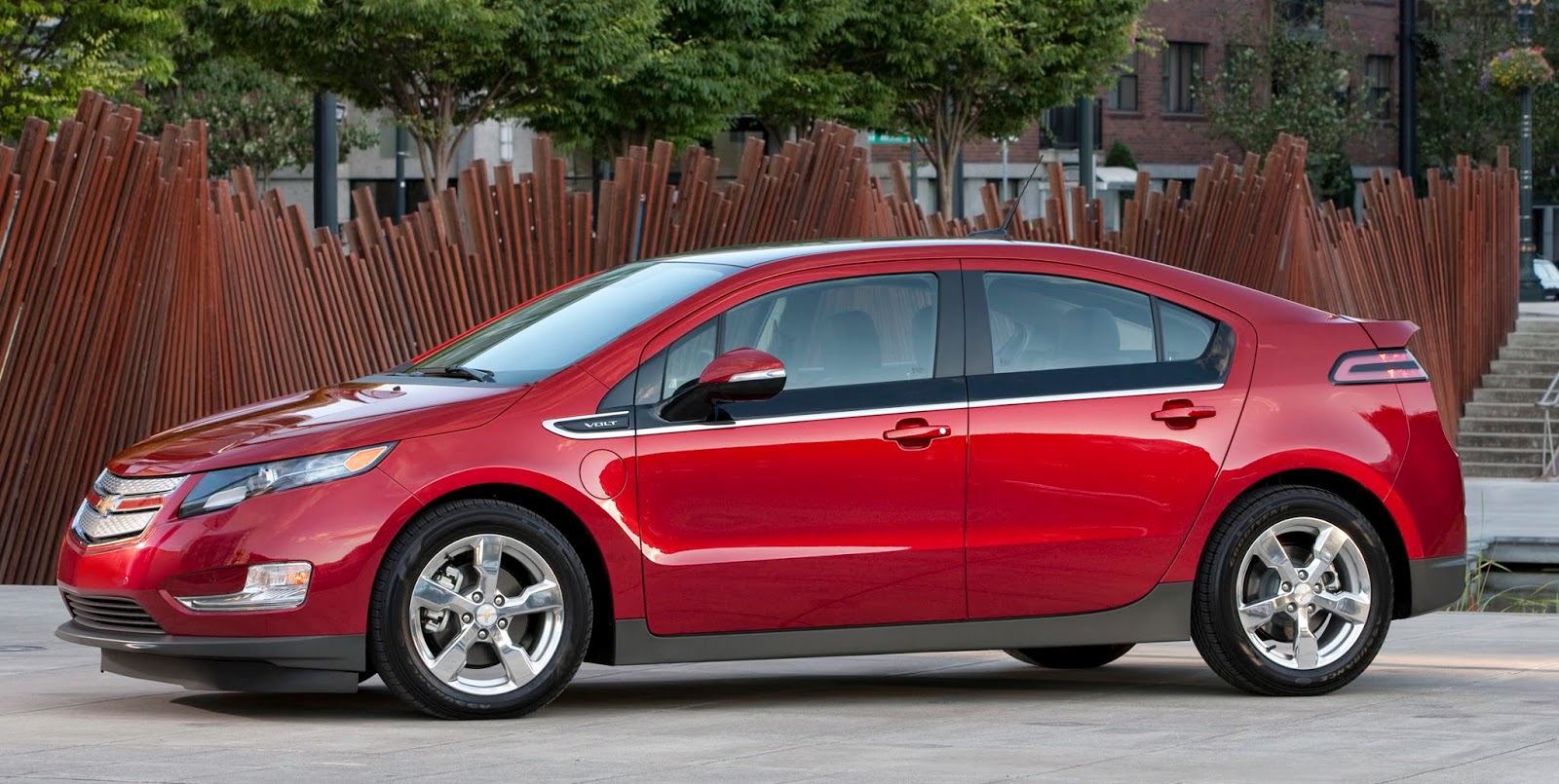 First hand experience, the Volt was a bunch of  "smoke and mirrors"  35 miles (maybe 50) on a single charge so if you lived 35 miles from work and plugged in you could conceivably go back and forth without the gas engine ever turning on. Toys and gadgets inside, it takes a pre-flight review to work the radio and adjust the seat!
$40,000 and you see if they still make em?
Well it may be back as a 2016, 400 miles on charges and gas, hum my 94 Caprice was able to go 400 miles between fill ups! It takes 4 1/2 hours to fully recharge its volt-age with a 240v plug in source, so what?
January 12 2015 Chevy announced a Bolt with possible 200 mile range on a single charge calling a Tesla Fighter and only about $30,000-$35,000 this time, oh boy!

Bolt Concept not reality yet, oh this is cool looking,not.
Hey a Chevy that is available for lease only in Oregon and California in limited quantities for $20,000 with an 85 mile charge range
Spark EV

And now the Short Circuit available later this year! 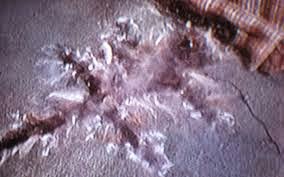 Oops, that is the cat from Christmas Vacation, my error!
We could keep going
http://www.eliomotors.com/#possible 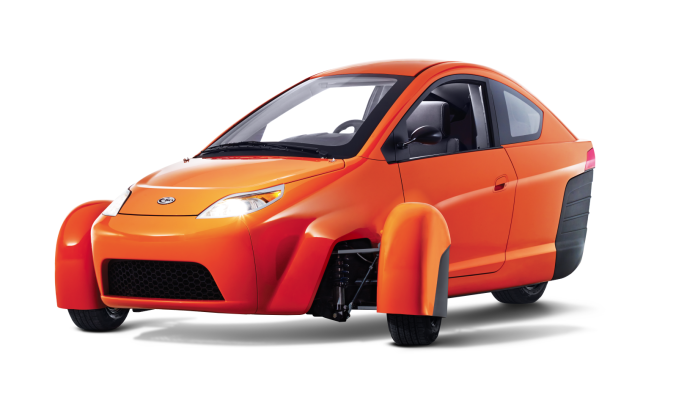 The final answer is that no one ever came up with some fantastic invention that would have warranted death threats or pay off hush money in the sum of millions.It seems either people were scam artists or very efficient engineering was bluntly ignored, but why?
It would seem that any ultra efficient running vehicle that optimized fuel economy would in theory be a cleaner emission vehicle because it literally would burn every last drop of fuel so what happened? 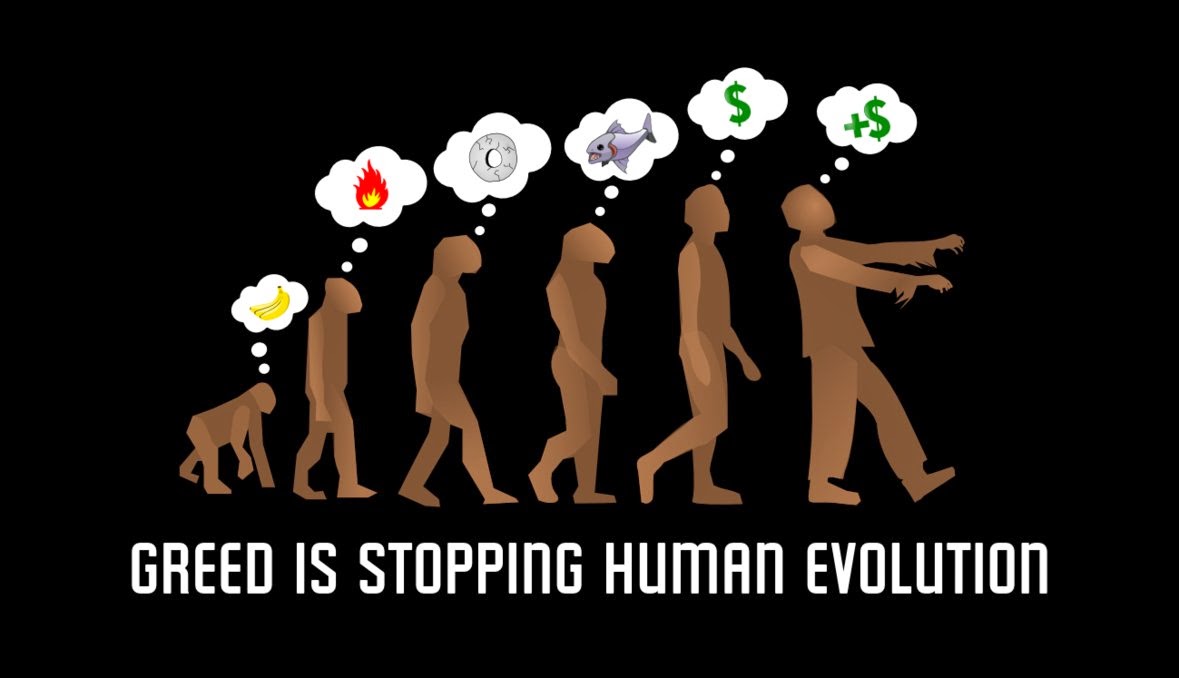 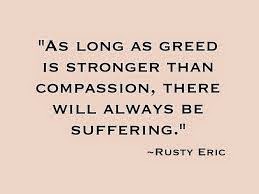 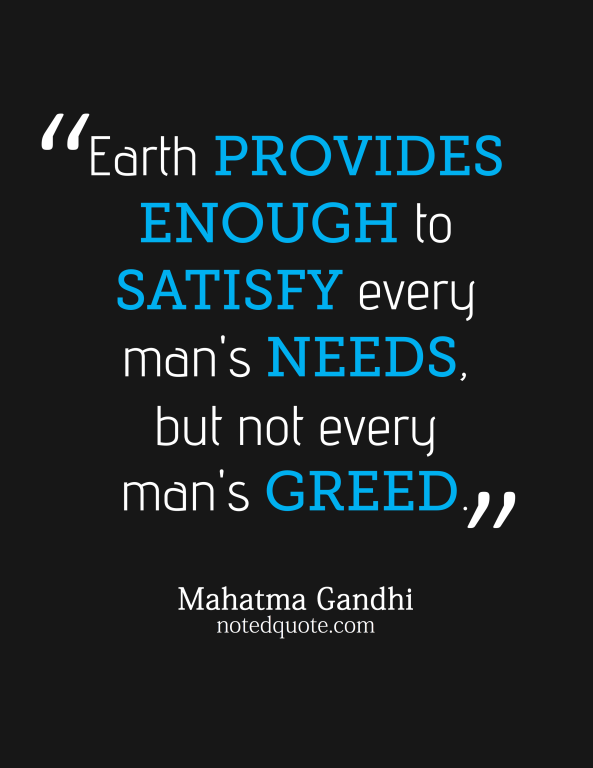 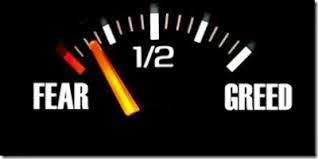 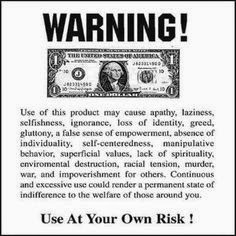 If you were able to make a fortune legally from, lets say OIL would you want to help reduce the worlds dependency? Why are Hybrids not half the price of gas powered cars, trying to ensure continuing wealth I say! Why would you make an extremely fuel efficient car if it would still only sell for about the same price as current cars? Draw your own conclusion please,but do not ever feed into any thing more than money being the root of this evil!
I CAN SEE THE TOTAL VIEWS ON EACH BLOG, WHEN THERE IS A PART 3 PLEASE TAKE THE TIME AND READ PARTS 1 AND 2 IN ORDER IF YOU JUST JUMPED IN!
Posted by GSONE at 7:18 PM