GENEALOGY 101, AS ERIC CHURCH SAYS,I KNOW WHERE I COME FROM, HOW 'BOUT YOU?

It occurred to me that I knew the histories of most of my low mileage cars including the selling dealerships!
Blue collar car and there's a whole lot more like it! 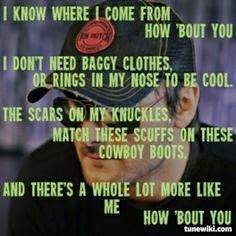 1974 Plymouth Satellite Sebring is the one I had no idea other than a man in Tennessee passed away and it was sold in an estate sale auction 2012? 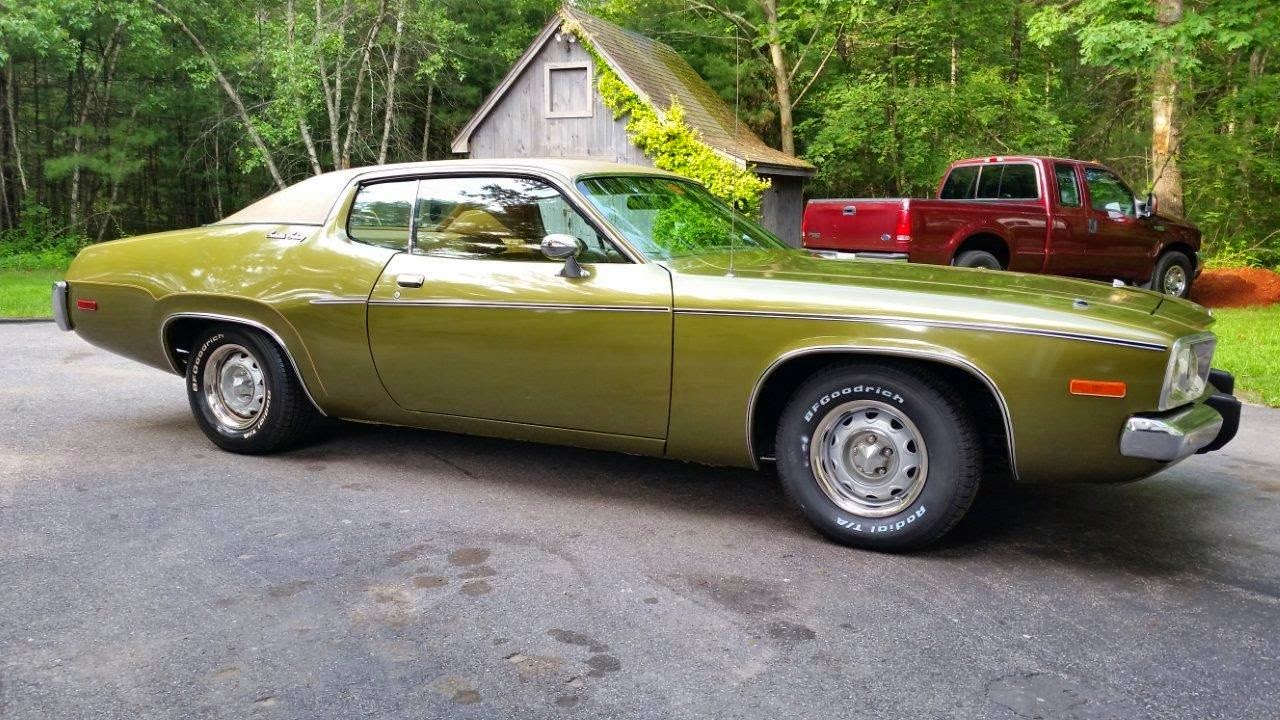 I am not going to print peoples last names except those that own dealerships with their name on them!
Let us back track as you recall on the blog of 6/23/14
http://carzhunt.blogspot.com/2014/06/oh-hoops-we-jump-through-to-buy-old.html
I had just completed a CARHUNTER mega trip while using it to look at 73-74 Satellites and Roadrunners which included a diversion back to Pittsburgh PA and a week later returning to New England where I found this car. 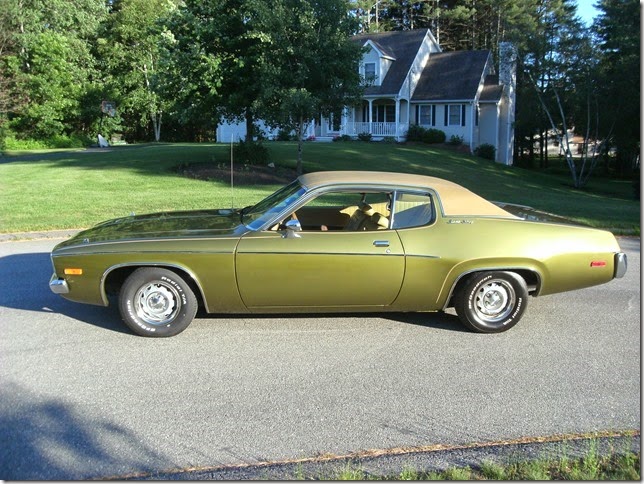 I purchased it from a Mark M in Litchfield NH who informed me he bought it from a collection in Tennessee. It was to be a donor for a restoration of a Road Runner, but too clean to scavenge! 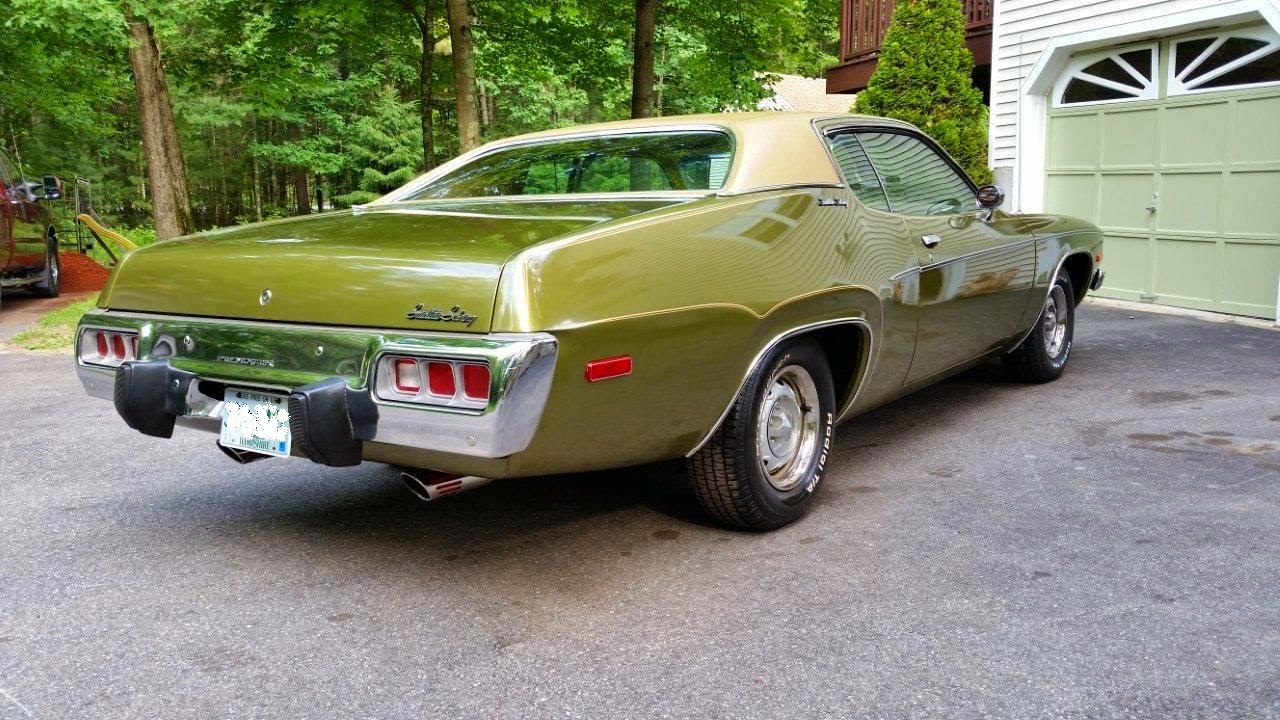 With the car home I started looking through included papers and find an estate auction inventory of  an LDW of Dyersburg Tennessee so it made sense as the car was on the list. 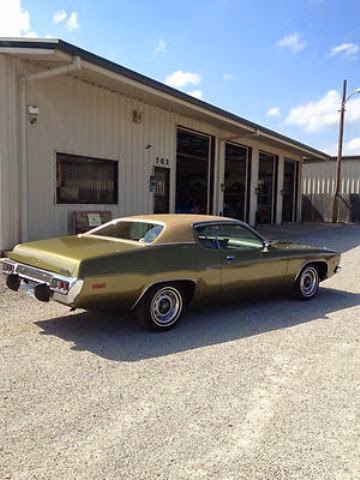 I search the Vin # on Google and it comes back to a Jerry's Auto Sales in Kennett Missouri in the above photo so I call Jerry N of Jerry's auto sales and it seems Jerry bought it at the estate sale of LDW and then sold it to Mark M in NH. Kennett is very close to Dyersburg, but Mark M must have remembered the Tennessee title of LDW which was reassigned by the dealer, Jerry's!
Did LDW buy the car new in Dyersburg TN? NO! 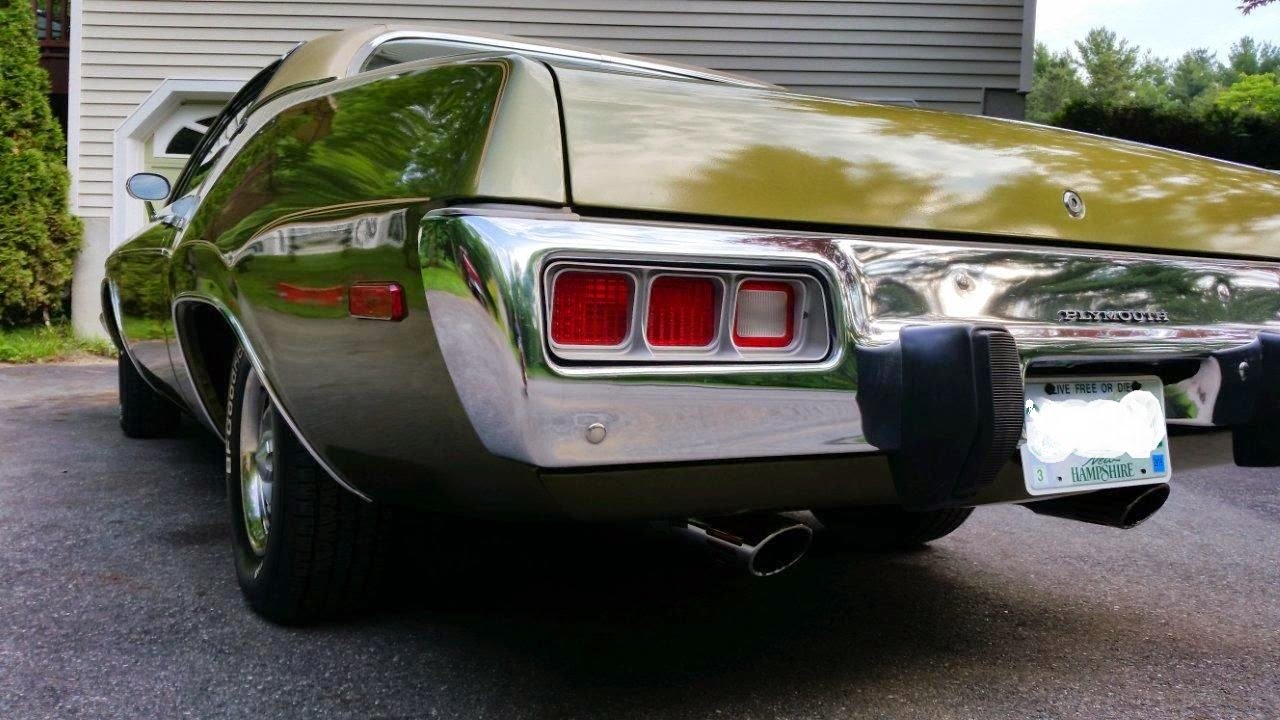 I start clean up and find a sticker from an appliance and A/C repair shop in West Frankfort Ill? 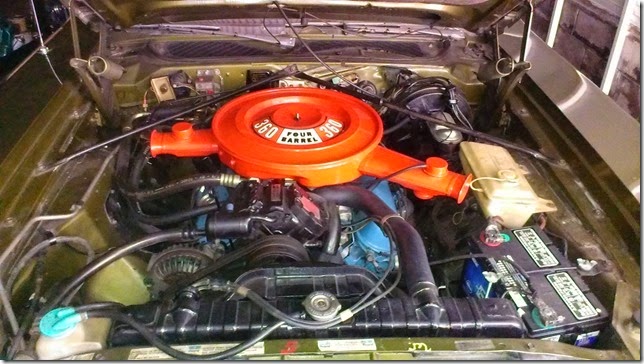 The sticker removed now was just right of the radiator hose along with some strange paint markings on the radiator support seen above.
LDW had a brother who lived in Lockport Il. and West Frankfort is right on the route from Dyersburg so did he stop on the way? NO!
I look around Dyersburg and find recently that United Chrysler Plymouth's old building for sale, did LDW buy it there in 1974? NO! 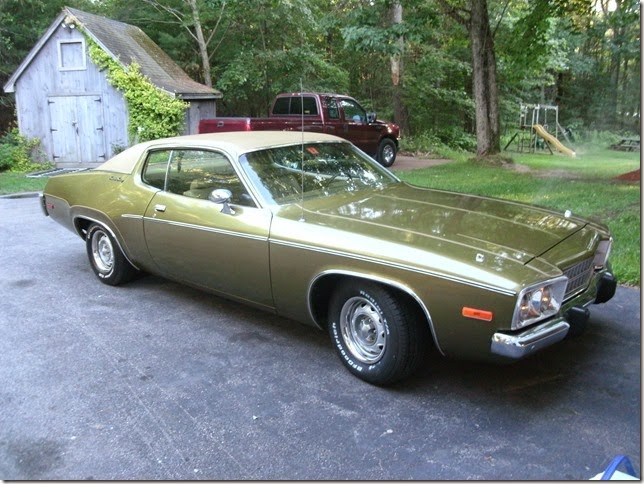 I put a facebook question to the Dyersburg TN classic car club and eventually get a few responses and find LDW never bought a new car in his life, just bought low mileage cars in his travels as an insurance salesman. 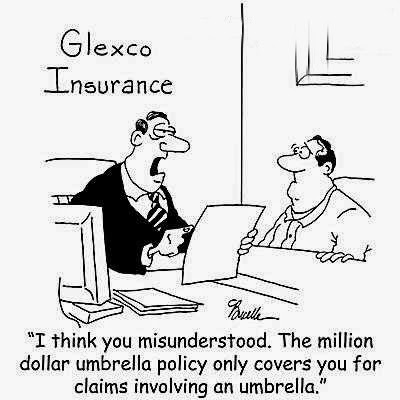 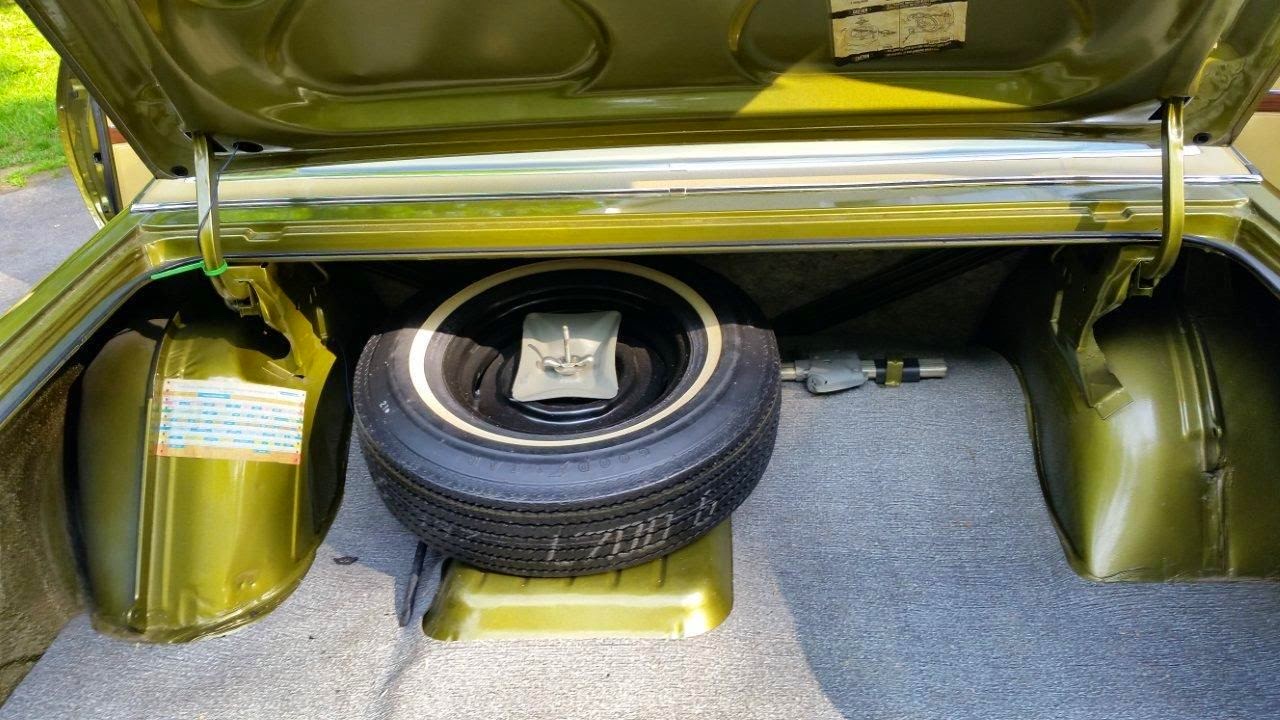 The car is very original and I believe LDW glued part of the build sheet to the inner fender and I have carefully removed it and saved.
Demaretti Chrysler Plymouth was here in 1974. The local Chrysler dealer now in West Frankfort is Greg Weeks, Glen Weeks son! A Demaretti works for Greg Weeks, but I was informed Demaretti was not the owner of the Chrysler Plymouth dealer in 1974 yet!
Glen Weeks classic cars can not confirm the car was sold by them? They are still checking and have confirmed yearly trips to that Arkansas car show! NO traces of the car being handled by them! 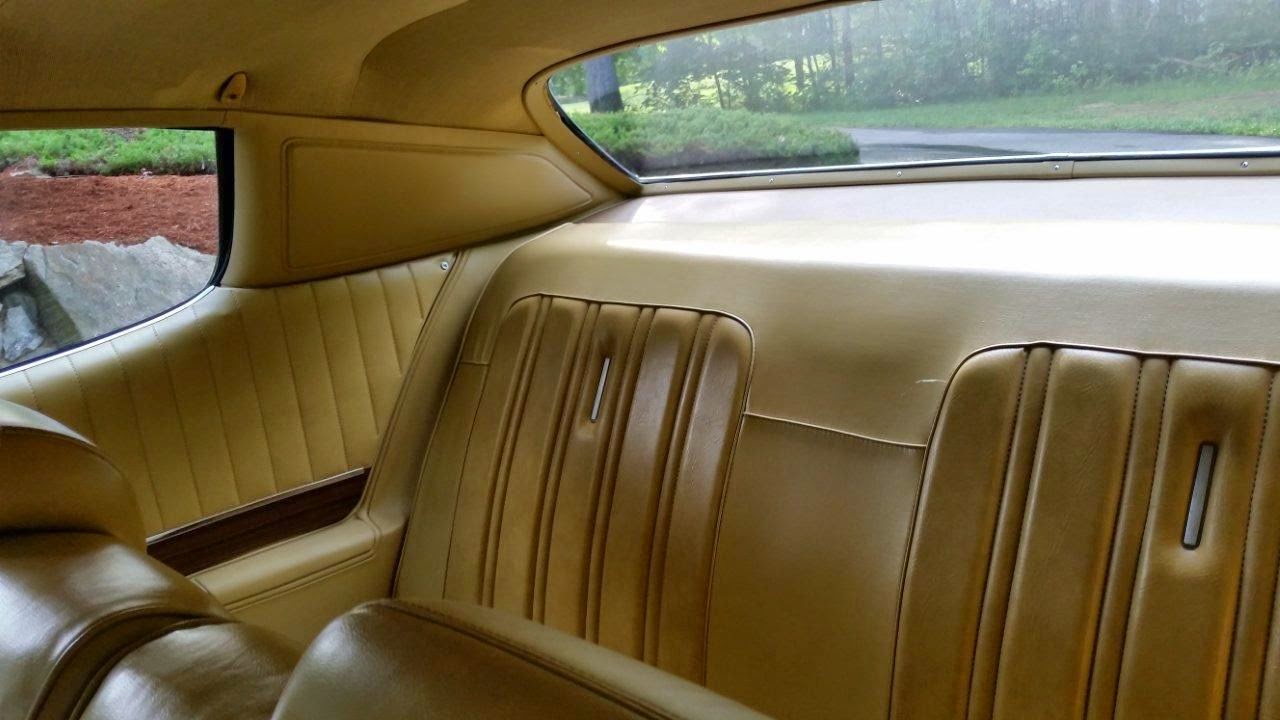 By a stroke of luck (undisclosed method here) we get a lead that the car was delivered in Benton Illinois to Hunky-Lynch Chrysler Plymouth in January 1974 and Benton is 10 mins from West Frankfort! The build date was in January of 1974- BINGO?
I find an address for Hunky-Lynch CP and it very close to a large used car dealer Jamerson's and I find out Ed Jamerson worked at Hunky-Lynch in the late 70's which was 2 doors down the street and so far no one remembers the car although it looks like it stayed between  Benton and West Frankfort for awhile? An Avocado Gold car with Saddle interior and top did not stand out? 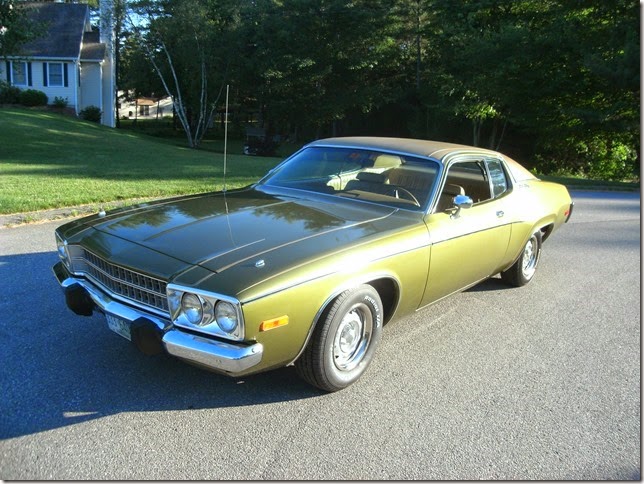 I dig around Benton Ill. and see the Chamber of Commerce is in a restored 1910 Ford Dealership that also serves as a small auto museum, good place to call! 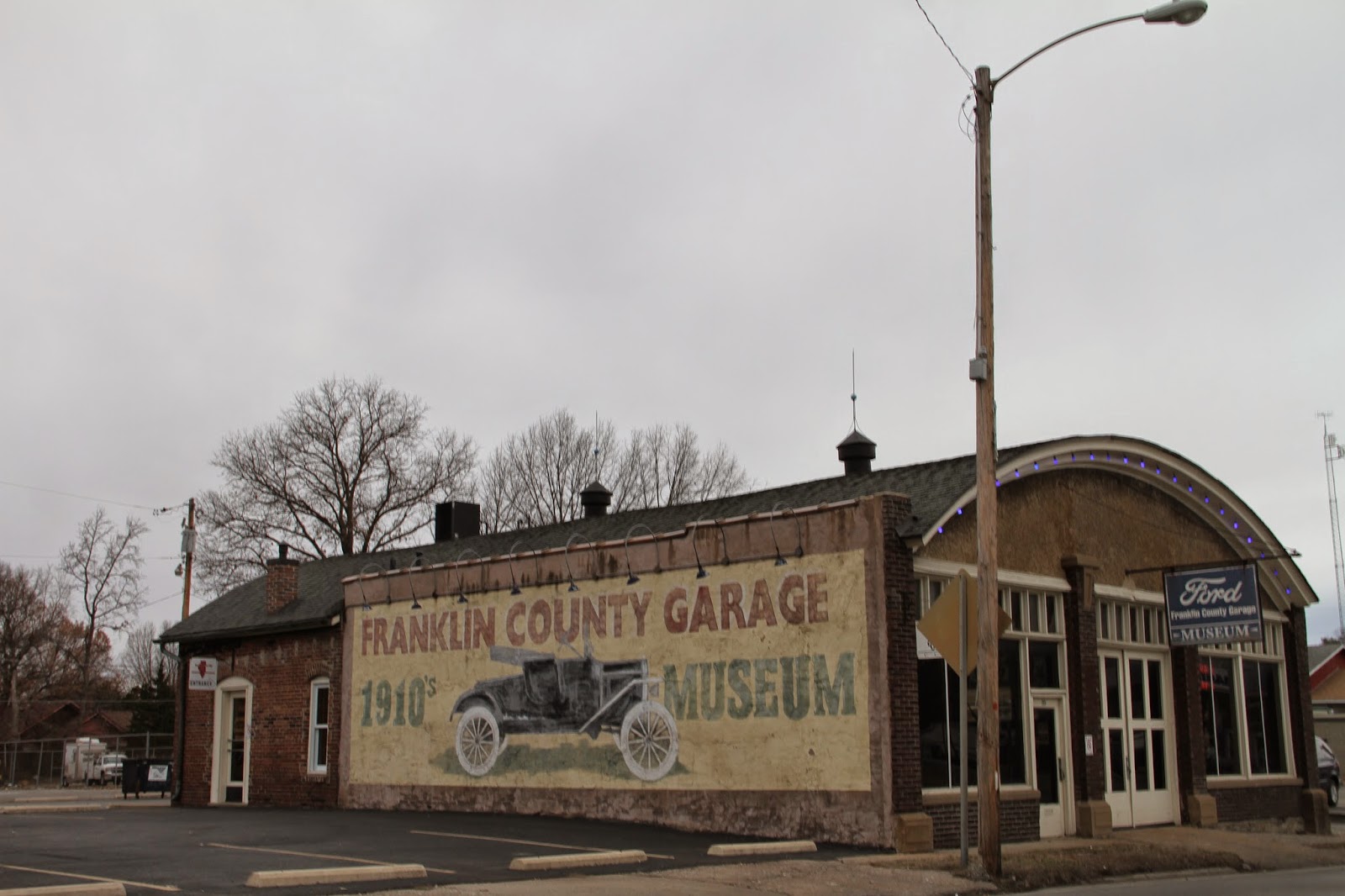 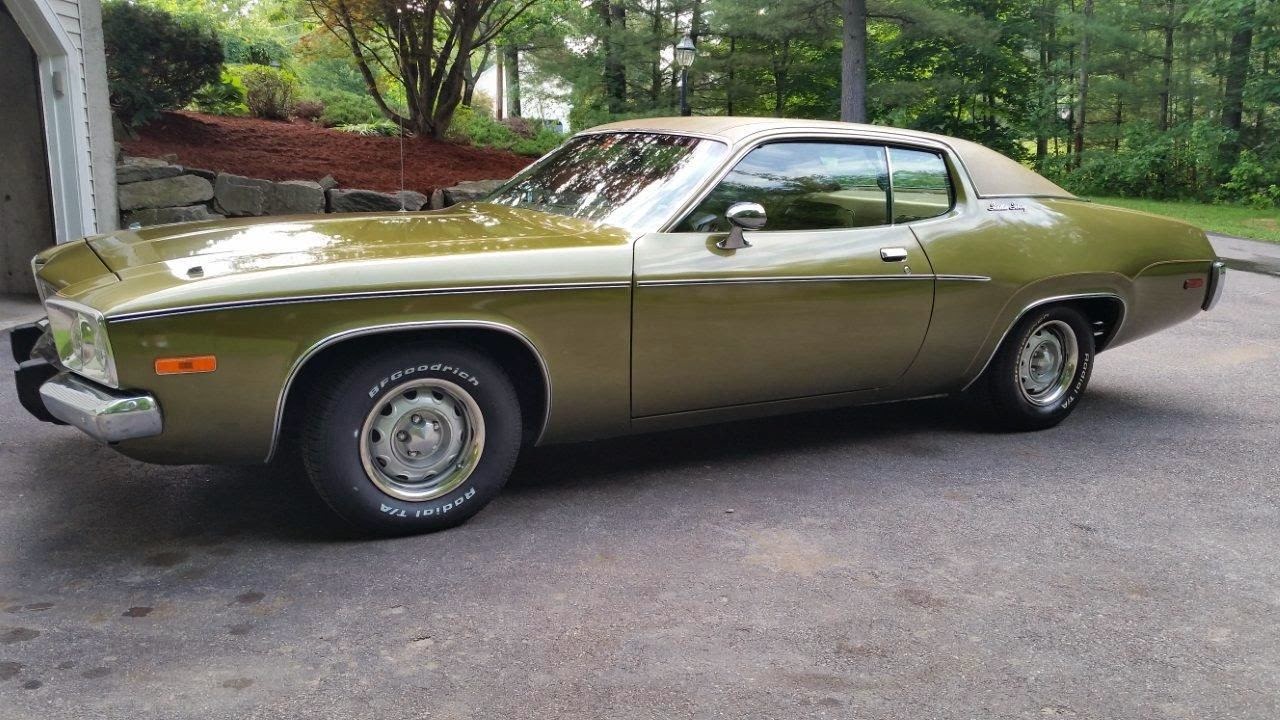 Aware of the old Hunky-Lynch CP a young lady takes my info and calls me back the same day to inform me she spoke to Kathy B who is Mr. Lynch of Hunky-Lynch's daughter!
Not only is Kathy B a family member,but was the dealer principal at the end as they gave up the franchise. Kathy had much info and told me Chrysler was not reimbursing them for warranty repairs so they gave up the franchise in about 1980. I was told Mr. lynch was very sharp and remembers everything except he is color blind and just picked colors without knowing what they looked like! 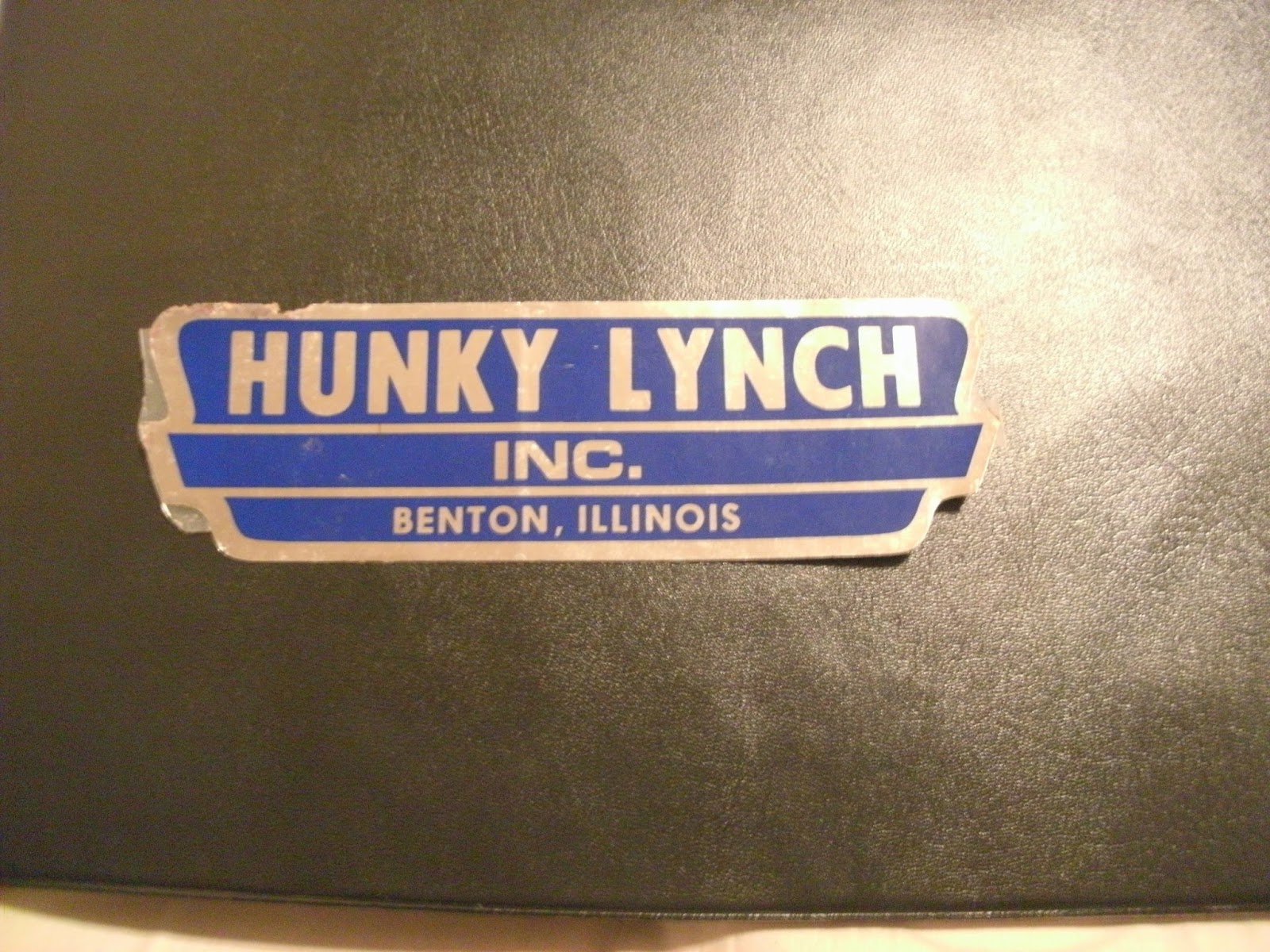 JACKPOT!
The sales records are just not accessible nor was the car remembered, but she has located an original Hunky-Lynch dealer decal for the back of my car!
We still believe the car was sold at Hunky-Lynch, but confirmation? 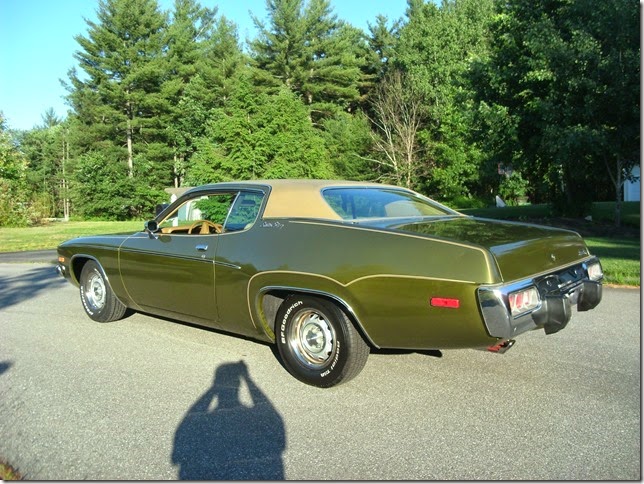 Yes that crazy pinstriping tape has been removed!
Crazy that 2 dealership literature collectors are in Benton on ebay, one already came up with a Hunky-Lynch keychain for me! 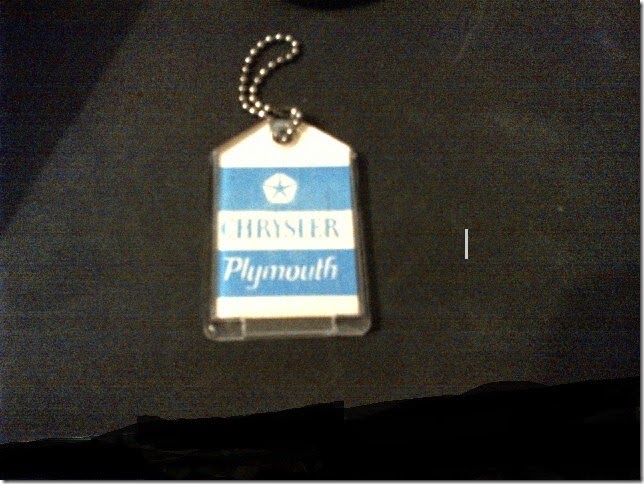 New info pops up of a last issued title in Illinois 1992 with June R and Sue E, don't ask how I got anyplace with that? Both of the names were their middle names = Helena June R and Sarah Sue E, Sue turned out to be June's daughter and from Sesser Illinois which is 15 minutes from Benton! I find an address,but no listed phone numbers! A letter is sent to Sue who is in her 60's now. 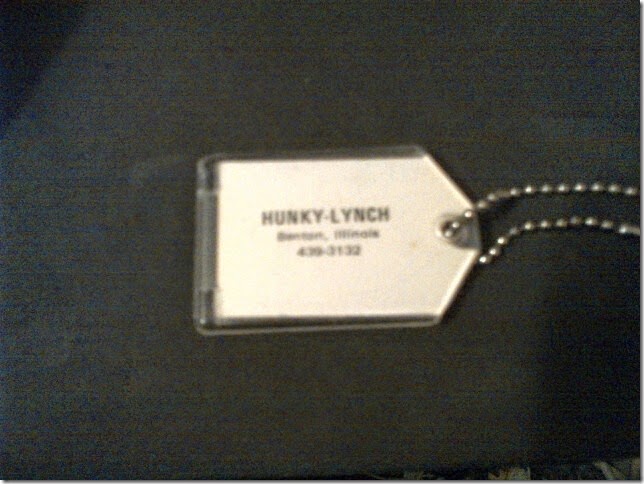 I get a phone call from Sue E who begins to fill in all the blanks, the address is a rental she manages, but Sesser is a small town and the letter finds her. Sue never owned the car and thinking mom June owned it were partially correct. June's sister, Sue's Aunt, Dorothy G moved back to Sesser with Husband John L. G in 1972 and was a real car guy, they walked into Hunky-Lynch in 1974 and bought this car from the inventory and the car was cared for and garaged, it is funny I believe they lived in a modular (trailer) home, but had a big garage! 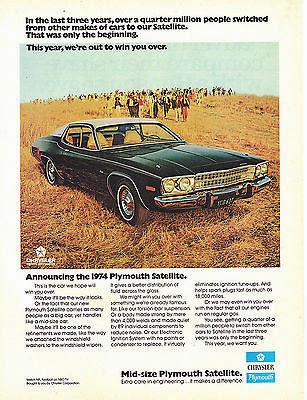 John passed away in 1976 and Dorothy did not have a drivers license! This 2 year old car sat for awhile not being used in that garage until sister June pushed Dorothy to get a drivers license and then the car only saw short trips within Sesser exclusively ! 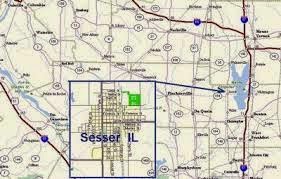 With no children all of Dorothy's possessions were willed to sister June so the title was in both names if one day this was needed.
Some time in the 90's, 1992(?)  a decision was made to sell the car after approximately 18 or so years and it only reached mileage in the low teens and still looked like new, instead of selling locally, an ad was placed in a collector publication which promptly found a serious car collector! 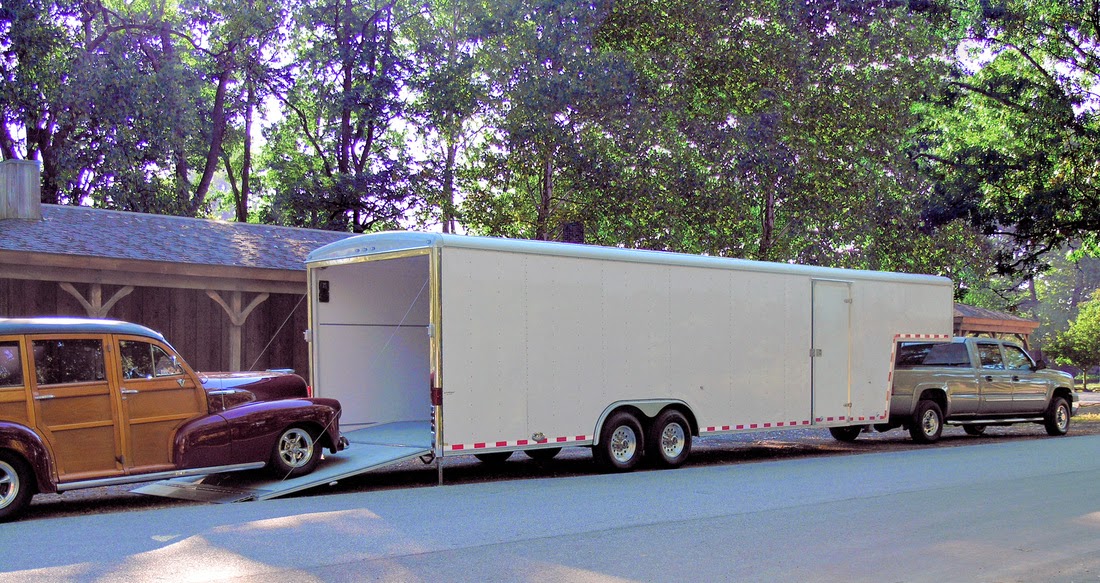 All Sue remembers is a very serious enclosed car trailer showed up like the one above and the car was hauled back to a collection, when asked she did say it was possible there was a Tennessee accent, Although it is a little cloudy it appears that LDW of Dyersburg Tennessee was that man who took the car home! 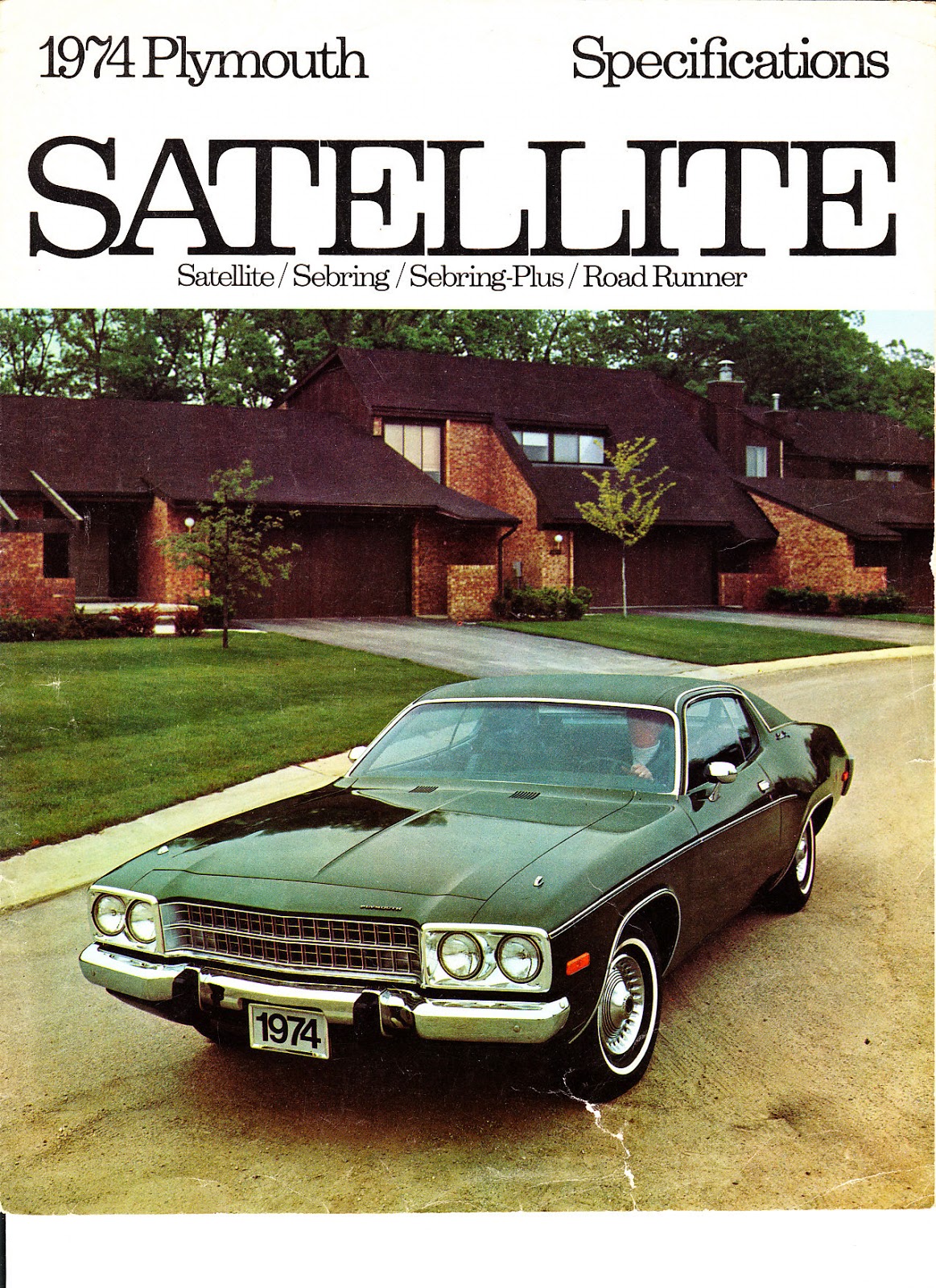 January 1974 the Plymouth is built in the St. Louis Plant in Missouri 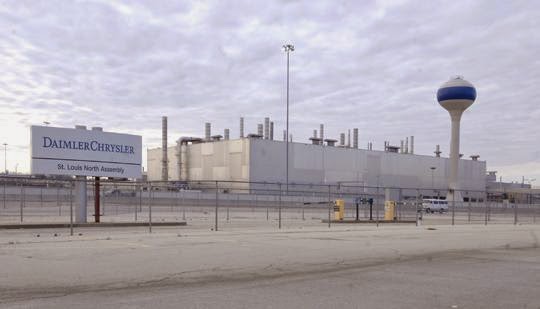 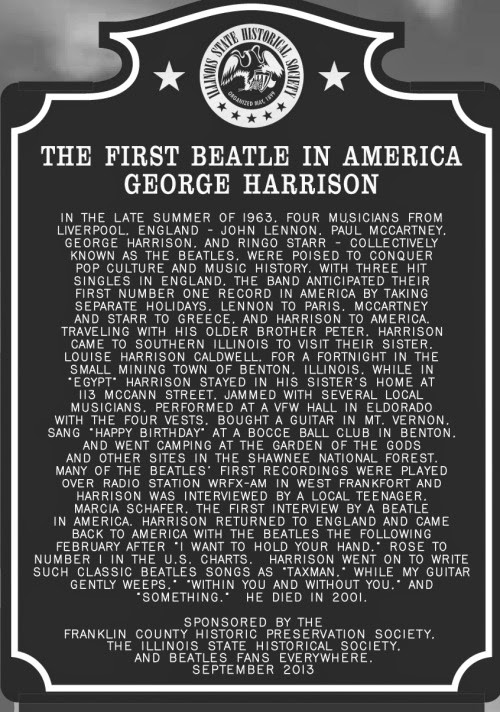 Unknown date in 1974 John and Dorothy G purchase the car and bring it 15 minutes back to Sesser Illinois, one of many short short trips!
For 18 years it does not leave the area, maybe a trip to West Frankfort for an A/C repair, don't worry it is only 20 minutes from Sesser! 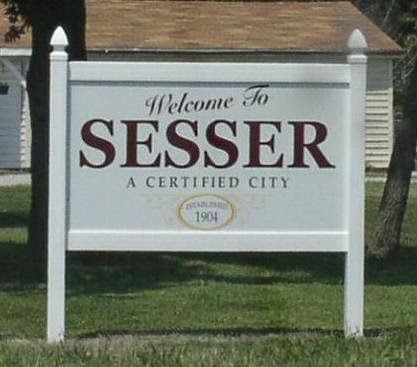 Average mileage per year is under 700 miles per year!
1992 estimated the car is hauled,by trailer to Dyersburg Tennessee, 180 miles and 2:45 away, this the furthest the car travels since it was built,but in a trailer! 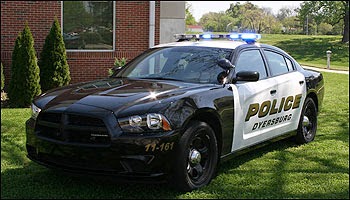 Another 19 years go by and the Plymouth again is used sparingly and only gets another average of less than 1000 miles a year bringing the mileage up near 30,000
2012 it is transported, not driven from Dyersburg to Kennett Missouri 40 miles and 40 minutes away! 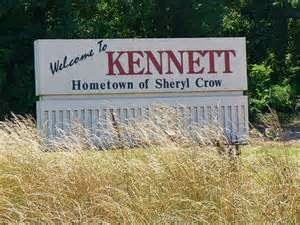 38 years later it returned briefly to its birth state of Missouri, about 3 hours from the factory!
Summer 2012 the car is now transported, not driven to Litchfield New Hampshire 1300 miles and almost 20 hours away! 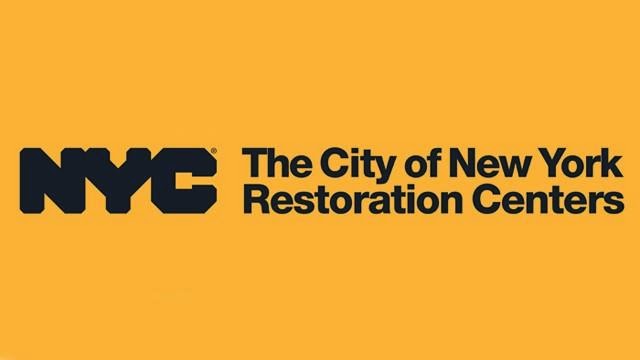 No Restoration Needed!
Don't worry it s nicely tucked away in the garage and barely driven since that drive!
A friend "CB" was helpful!
A void now in my life because I am not searching for the history of the Satellite anymore, maybe I need to buy another car? LOL!